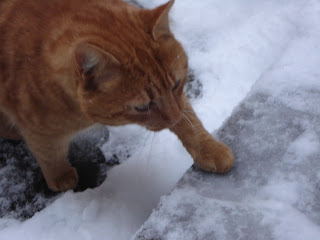 AFTER yesterday's slight thaw more snow fell overnight. I awoke to find a monochrome world. Sky, ground, houses, cars and gardens had taken on the same curious yellowish grey tinge. The winter wonderland has vanished, the view is bleak and depressing and snow has continued to fall throughout the day - small, wet flakes that you think will never settle, but they do, building an ever-deepening layer on top of the older ice and sludge which lies beneath.

People trudge along, heads down, brollies up, faces as cheerless as the weather. Warmth and sunshine have become a distant memory in this seemingly endless winter...

Even Muggins, our Marmalade Cat, has lost his usual zest for life, and having swaggered outside to investigate he turned around, crept back in, curled up by the fire and now refuses to budge futher than his dish of food.

However, news of an earthquake in Haiti overshadows the problems caused by the English weather and I count my blessings as I watch heart-rending pictures of the homeless and injured, bewildered and confused, with no hope in their faces.

And I wonder how a world which unleashes such powerful, destructive forces can be the same as the world that creates the delicate tracery of a snowflake.
Posted by Christine Harding at 10:26 pm