Walking in the Snow

I looked out of the window this morning, to see more snow: not a lot, more of a sprinkling or dusting than a covering, but it did look pretty, so I went out early, with my camera, and walked down into town., and took this photo of Tamworth Castle perched on its snow-covered mound. 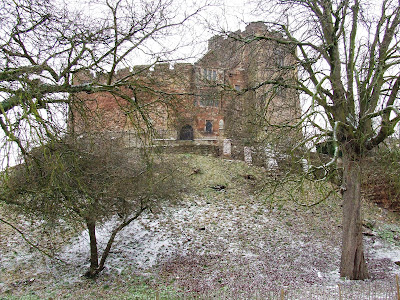 The canal was frozen, and looked more than a little bleak, with no sign of life – last year I watched ducks skidding and skating on the ice, but they ere nowhere to be seen today.

In MacGregor Park daffodils were pushing their way through the snow, lots and lots of green leaves, still far too small for flowers, but it’s a sure sign that spring is on the way, and it won’t be long until the grass on either side of the path is a carpet of flowers.
I walked under the Arches and alongside the river, watching the ducks and the geese on the Anker. The ducks are mallards, but I have no idea about the geese: I looked at photographs I took, and then looked online in a bid to identify them, but I’m really not sure – Canada geese maybe? The Castle Grounds, as ever, were really beautiful, and the Castle was wonderful. I love the Castle, and the way it is always different, depending on the weather, the light, the time of day, the season of the year. Even the colour of the stone it is built from varies.
There seemed to be fewer birds around than usual, but a few grey squirrels were out and about, bold and bright-eyed, foraging for food I suppose. As far as plants go, it’s too early for flowers to blooming in the terraced garden, but there are so many trees and shrubs with interesting leaves, trunks and stems that the lack of other colour really doesn’t matter.
Walking back through the town centre to the bus stop (it’s uphill on the way home, and I was cold) I treated myself to a bag of toffee bon-bons, or snowballs as I’ve always called them, which seemed considerably smaller than they used to be.
Posted by Christine Harding at 1:06 pm