Make Hay While the Sun Shines

eep your fingers crossed for lots of sunshine today, because according to an old weather forecasting rhyme, used by country folk long before meteorologists came into being:

If the first of July be rainy weather,
‘Twill rain, more or less, for four weeks together.

Most of this old weather lore seems to revolve around attempts to predict bad weather. I suppose people must have marked the seasons by looking for patterns in the weather, watching the behaviour of animals and birds, and noting when plants bloomed or seeded. When you’re dependent on harvesting crops so you have enough food to see you through the winter, then I guess it’s really important to know what kind of weather lies ahead – after all, bad weather meant the harvest as ruined, and that meant no food.

The month was named in honour of Julius Caesar – before that it was known as Qunitilis, or the fifth month (the Roman year started on March 1). And Caesar’s reformed calendar was used throughout Europe, until it was superceded by the improved Gregorian system in the 18th Century.

Traditionally, it was the hay-making month, and was consequently known to the early Anglo Saxons as Hegmonath, and if you look at illustrations from those wonderful Medieval Book of Hours manuscripts you find that pictures for July invariably show peasants out in the fields, cutting golden grass with their scythes – like this one from the 15th Century Tres Riches Heures du Duc de Berry. I just love that glorious blue, and the two men hard at work with their clothes as faded as the sun-bleached field. 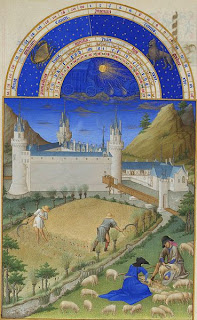 Hay was especially important, because it provided fodder for animals: if the grasses failed to thrive and ripen then animals starved to death, which was disastrous. And if the hay wasn’t cut and protected before bad weather set in, and it got even a little bit damp, it would go mouldy and make the animals ill. The expression ‘making hay while the sun shines’, must have been coined when it was vital to seize the opportunity and gain benefit from harvesting dry, ripe hay while you could, and is still in use today.

In Tudor times,when Thomas Tusser wrote his Five Hundred Points of Good Husbandry (all in rhyming couplets – just imagine the effort involved in that) hay-making was still the most i portant task of the month for farmers. He tells us:

Go, sirs, and away,
To ted, and make hay.
If storms draw nigh,
Then cock apace, cry.
Let hay still bide,
Till well it be dried.
(Hay made) away carry,
No longer then tarry.

For centuries hay-making was one of the big events of the farming year, with whole communities turning out to help, and suppers provided by landowners when it was all gathered in – similar to the harvest suppers laid on later in the year. It also inspired writers and artists. Think of the hay-making scene in Thomas Hardy’s ‘Far from the Madding Crowd’, or this painting by Pieter Bruegel the Elder, packed with activity. Look closely, and you can see all kinds of activity going on. I particularly like the man sharpening his scythe, on the left-hand side of the picture, and the people who look like aliens with spiky heads, who are actually carrying hay in baskets on their heads. 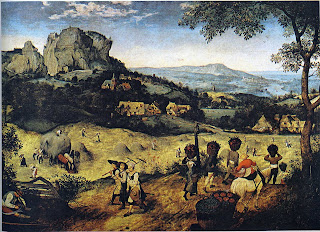 Anyway, if you want to celebrate the first day of July, you could mow the grass - after all it is the haymaking month! If that's too energetic, take a gentle stroll through a field of long grass and wildflowers... Or read 'Far From the Madding Crowd'.... or the Edward Thomas poem 'Haymaking'... And listen to Catatonia, 'Make Hay Not War', which is really called 'Dead from the Waist Down', and you'll find it here, with a fabulous video heavily influenced by The Wizard of Oz, Worzel Gummidge and goodness knows who else...
Posted by Christine Harding at 12:16 pm