Snapshots of a Camera 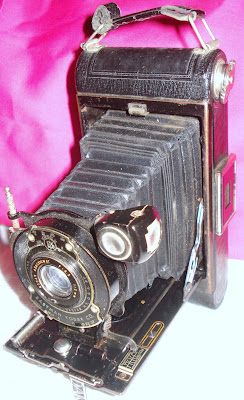 This week's Saturday Snapshot is really special to me because it shows my Father's old camera. Dad died nearly seven years ago, just before Christmas, and this camera lay hidden in a cupboard for a long time because I felt tearful every time I looked at it. But recently I took it out and prised it open, and made a little display on a shelf, a kind of memory corner, with a couple of shots of Dad holding the camera, and a few of the pictures he took with it, and a photo of him and Mum at their wedding.

It's a No 1 Pocket Kodak Camera Autographic model manufactured by the Eastman Kodak company some time between 1926 and 1932, and it must have been old he acquired it (he was born in 1922) but it was his pride and joy for many years, and he kept it long after he stopped using it. Other cameras came and went over the years, with assorted lens, filters and flashlights, but this one  outstayed them all, and it must have meant a lot to him because he hung on to it, even though was (and is) unusable without some kind of restoration work being carried out. 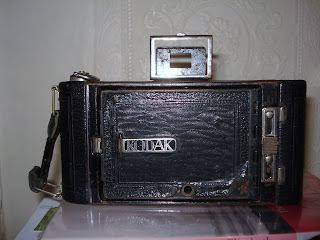 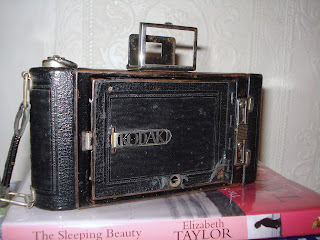 Personally I think the name is a misnomer, because you'd never fit this into a pocket - the leather case is around 2mm thick, and it measures about eight inches, by four inches, by two inches, and is quite heavy.

The concertina bit that pulls out is actually called a bellows, and now lets in little pinpoints of light along its edges and points, so there's no way you take pictures, because any film put through it would almost certainly be badly fogged and damaged by light, but film is still available which would fit it, and I would love to know if it could be repaired.

The original film, which is no longer manufactured, could be written on with a beautifully decorated metal stylus which looks like a pen or pencil and is clipped to the side of the lens. Apparently the stylus slotted into into a hole, and could be used to write the date on a film, or the place where a photo was taken, or the name of the person in it.  people could write the date on the film (there is a little hole at the back that the


The photos taken on it were all black and white (I guess no colour film was available in those days) and they were quite small, and some of them seem quite fuzzy, but the camera is surprisingly sophisticated, with variable shutter speed and all kinds of features.

Dad loved taking photographs. The more complex a camera was, the more he liked it, and he took everything very seriously, checking the position of the sun, and his light meter, and the distance from his subject.  Sometimes he spent so long setting things up that we all got fed up, and would wander off, but it was worth being patient because he took some beautiful photos when we were on holiday, and lovely portraits of my brother and I when we were young, and of my daughters when they were small (but not on this camera, of course). 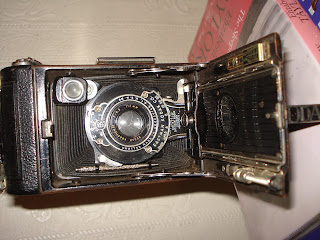 Anyway, now I have the camera on display I find I can look at it and smile at the memory of Dad taking his pictures and think of how much pleasure it gave him.

Saturday Snapshot is hosted by Melinda at West Metro Mummy.

Posted by Christine Harding at 11:28 pm