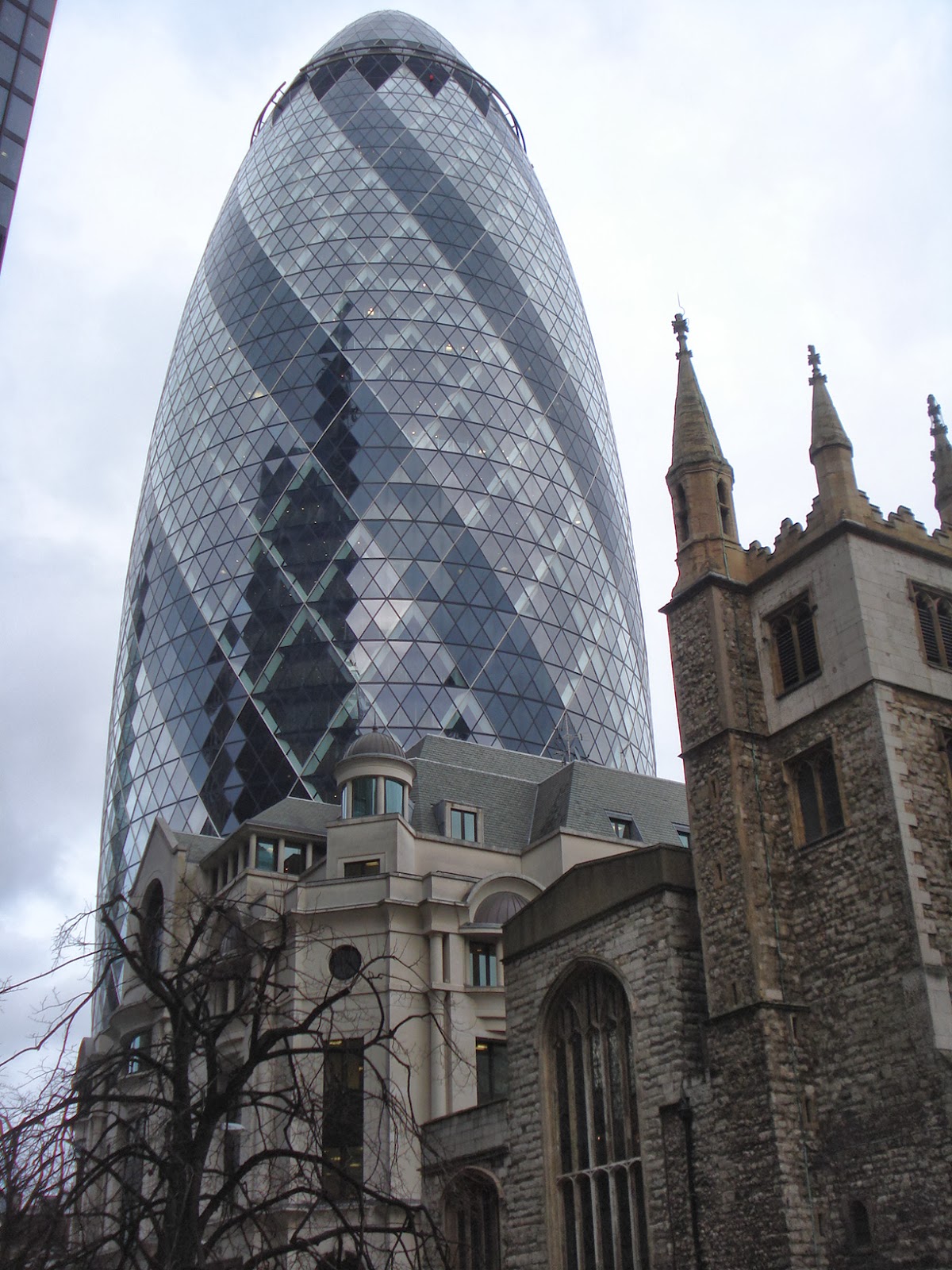 More pictures from London for today's Saturday Snapshot because I had such a good time on my day trip! Following on from last week's 'Paleys Upon Pilers', which echoed a Medieval city gate and Chaucer's 'dream' buildings, here are a couple of shots of the ultra-modern Gherkin, which seems to have become an architectural icon. We saw it on the skyline from further away, but it disappeared from view as we walked along nearby streets. Then, as we turned from Leadenhall Street into St Mary Axe, wham! There it was! It was so stunning, and so unexpected, it took my breath away, and I just stood and stared.

Oddly, for such a huge building (40 floors and 591 feet high) it seemed smaller than I expected, even though it’s big, big, big… When you’re close to it the scale is difficult to take in: perhaps it has to do with that strange disappearing act as you approach, or a shift in perspective. Then there’s the glass, and that fabulous curved shape, and the slightly distorted reflections of clouds and buildings, and the way it pushes sky-ward. Somehow it all seems to make the building appear less substantial, less bulky, less weighty than impressions given in photographs. And it rises from a surprisingly small patch of land, squeezed in between roads and other older, more historic buildings, as if it’s trying to escape the ground which confines it, like a rocket, or a helter skelter. 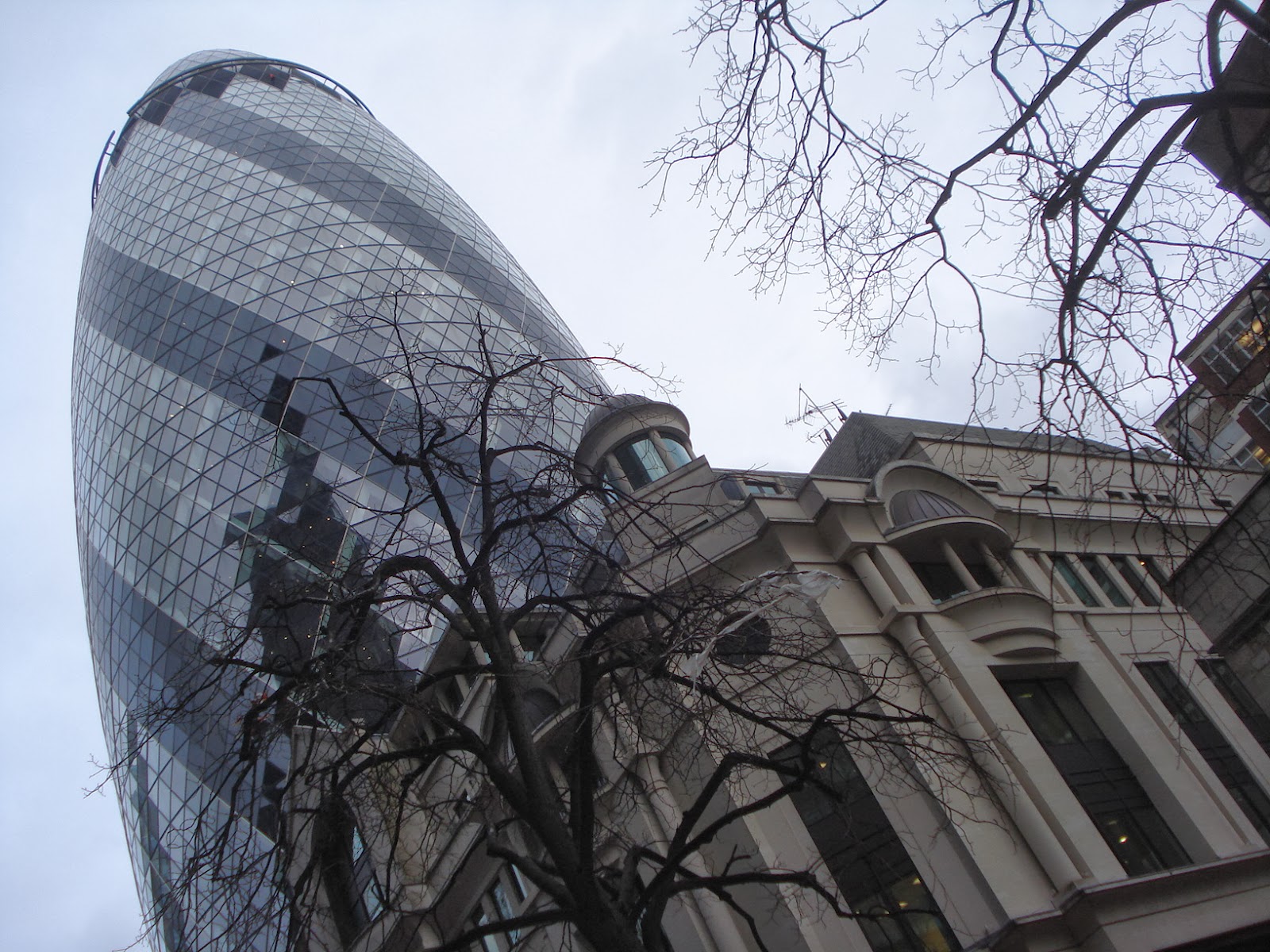 But let’s not forget that the site has its own history. The Baltic Exchange, built in the mid-18th Century to protect the interests of merchant shipping companies around the world, stood here in the heart of London’s financial district until it was wrecked by a Provisional IRA bomb in 1992. I gather that originally it was hoped to save part of the building, and incorporate it into something more convention, but the damage was too extensive. As a rule I’m not a fan of modern architecture, but I make some exceptions: Coventry Cathedral is one, and this is another. I love Norman Foster’s design, and all those giant glass triangles and diamonds remind me of the leaded lights in Medieval and Tudor buildings, but whether that's intentional or not I don't know. And, perhaps, in circumstances like this it’s better to create something new and completely different, that’s true to itself, rather than producing a pale imitation of what’s gone before. 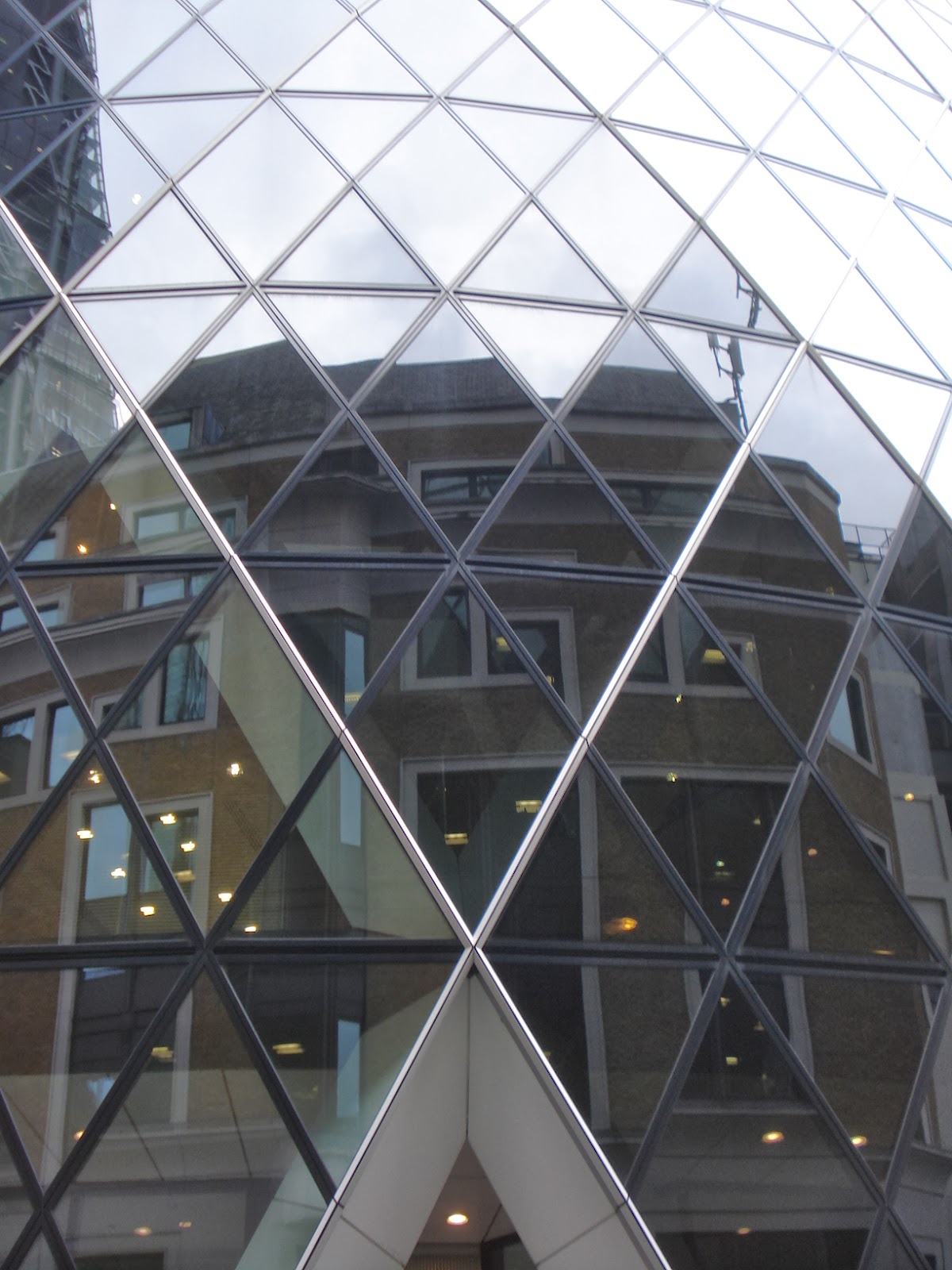 I didn’t expect to like it, but I do. I think it’s like a 21st Century fairy tale tower (and I’ve always liked fairy tales and towers), with ever-changing pictures playing across its curved surface. And it’s much, much, much nicer in reality than I imagined – photographs, drawings, even TV or video images, don’t do The Gherkin (otherwise known as 30 St Mary Axe) any justice at all. It has to be seen to believed.

Saturday Snapshot is hosted by Melinda, at West Metro Mummy - click to follow the links to other participants).
Posted by Christine Harding at 1:00 am