Today's walk was along the Coventry Canal, on one of my favourite routes, from The Glascote Road Bridge to the Fazeley Aqueduct, where you can stand by the canal and look down at the River Tame, which always intrigues me. It was mid-afternoon when I set out, accompanied by the Man of the House, and we'd only gone a yard or two along the towpath when our attention was caught by the sign on this boat: 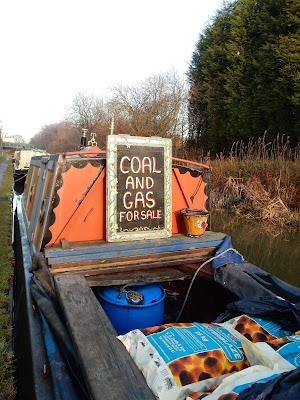 Aha, we thought, a waterborne coal man - how apt is that when you remember that coal was one of the cargoes carried on the waterway when it was first built! Indeed, according to some sources the canal was created specifically to transport coal from the midlands coalfields to the city of Coventry where it fuelled homes and industry.

Work on the waterway began in December 1768, after the Coventry Canal Company was established earlier in the year. The scheme had to be approved by an Act of Parliament, and the great engineer James Brindley was taken on to oversee the project. But the following year he was replaced by Thomas Yeoman because there was no money left to take the waterway beyond Atherstone - less than halfway to the planned destination at Fradley (near Lichfield), where it was to join the Trent and Mersey Canal.

Financial problems continued, and it was seven years before work got under way again, and the canal reached Fazeley and linked up with the Birmingham and Fazeley Canal - but it was still a long way before the proposed finishing point.
﻿ Eventually, in 1789 the whole 39 miles was completed in after Parliament let the Trent and Mersey company, and the Birmingham and Fazeley company build the missing section. This gave boats easy access to Birmingham and Liverpool, opening up trade with a huge part of the country.

Links with the Oxford Canal and the Ashby Canal followed and, for a time, Midlands canals were the motorways of their day, carrying manufactured goods all over the country, as well as things like coal.


In the 19th Century, of course, canals lost out to the railways which provide fast, cheap freight transport, and in the 29th Century trains were supersededby road haulage.


The heyday of the waterways may have long since gone, but the Coventry Canal has remained navigable for its entire length (some commercial boats were still using it in 1970). It's become immensely popular with leisure boaters, and the towpath is well used by walkers, cyclists, joggers and fishermen. And it's a haven for wildlife - not just waterfowl and fish, but all kinds of insects, birds, small mammals, and wild flowers. It really is life in the slow lane, a place where you can stroll along, gaze at butterflies and ducks, wave at the boaters, smile at other amblers, so you return home feeling relaxed and refreshed.
Posted by Christine Harding at 9:36 pm