Grumpiness is Good for You 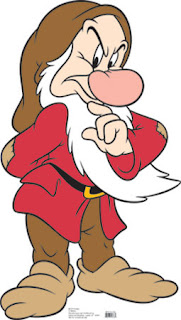 I KNEW it! Being grumpy is good for you! While trawling the net the other day I came across an item on the BBC news site which revealed: “An Australian psychology expert who has been studying emotions has found being grumpy makes us think more clearly.”
Miserable people are better at decision-making and less gullible, according to Professor Joe Forgas, a researcher at the University of New South Wales. His experiments showed that while cheerfulness boosts creativity, gloominess improves attentiveness and careful thinking.
Grumpy people are better able to cope with demanding situations than happy ones, he told Australian Science Magazine. And he explained that it’s all down to the way the brain ‘promotes formation processing strategies’.
It’s good news for people like me, who enjoy moaning and groaning.  Now, instead of being regarded as ill-humoured and cantankerous, I can legitimately claim to be clear thinking and good in a crisis - although my nearest and deartest may deny the truth of this.
It is a well known fact that the British love grumpiness. Grumbling is a national pastime and, given half a chance, most people will complain about something - the weather, other drivers, queues, prices, roadworks, automated phone responses…

And some of our best loved heroes were grumps: Winston Churchill, for example, was regarded by many as more than a little curmudgeonly. And some modern politicians can be just as grouchy:  Ann Widdecombe has become a national treasure as a result of her uncompromising views on modern life. 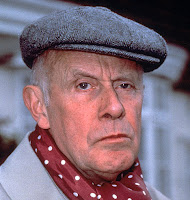 Princess Anne and Prince Philip have both built a repuation for being irritable, while the disgruntled questioning of John Humphrys, and Jeremy Paxman has produced some outstanding news interviews.
Some comedians have built their careers on their crotchety personas: Les Dawson, Jenny Eclair, Arthur Smith and many others found their humour in railing against society's ills.
The same technique stood actor Richard Wilson in good stead when he played the iconic role of Victor Meldrew on BBC television’s One Foot in the Grave.
Who hasn’t felt the pain of that anguished cry ‘I don’t believe it’ as he battles against the fact that life always seems to be against him.
Other fictional grumps include Eeyore, AA Milne’s gloomy donkey, who never knowlingly looks on the bright side of life - with good reason, for his home is stolen, he is bounced into a stream, and people rarely visit him.

Then, of course, there is Gumpy, the scowling dwarf in Disney’s classic animation of  Snow White, which has become as much a part of our cultural heritage as the original tale from the Brothers Grimm.

Finally, there is Samuel Johnson, one of the wittiest and most erudite grumps.  Best known for compiling the frst comprehensive English dictionary (published in 1755),  Johnson was a man of letters, an essayist, a critic, a novelist, a poet and a journalist.

His outlook was prolific and he expressed his opinions on a wide range of topics, including this, which is as good a description od grumpiess as you are likely to find:  "Writing about complaining he said:  "Every man may be observed to have a certain strain of lamentation, some peculiar theme of complaint on which he dwells in his moments of dejection."

And he also had some words of wisdom for those who get fed up with us whingers.  "To hear complaints with patience, even when complaints are vain, is one of the duties of friendship," he wrote. 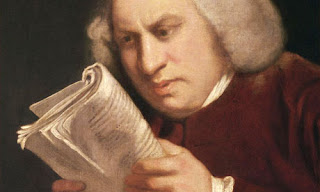 Posted by Christine Harding at 2:08 pm