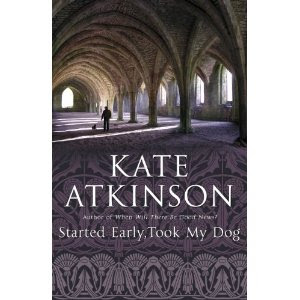 KATE Atkinson is one of my favourite authors, and Human Croquet is the book I would most like to have to written - but having just read Started Early, Took My Dog I feel she is in danger of becoming a little formulaic.

It is not that the book is a dud. It isn't. Atkinson is a master of her craft, with a matchless ability to entwine time and characters as the past and present unravel their secrets.

In all her novels nothing and no-one are quite what they seem. Lives collide and worlds are turned inside out as actions taken long ago continue to echo down the years, while Nemesis stands just around the corner waiting to avenge the innocent...

Perhaps that is what is wrong with Started Early, Took My Dog . The themes and style of writing are too similar to what has gone before.

As before, the labyrinthine twists and turns of the plot rely heavily on co-incidence, but this time around the element of surprise is lacking, and the story line seems a little more predictable.

It is the fourth appearance for private detective Jackson Brodie (whose private life is as chaotic as ever) and follows his efforts to discover who a young female client really is.

His search for the truth about her identity takes him on a 30-year time trip involving a murdered prostitute and a police cover-up.

Along the way he meets a cast of characters who should be intriguing, but many are a little less real and less sympathetically drawn than those in Atkinson's previous books.

There is, for example, an alcoholic former journalist, a hippy dippy social worker and a very unwelcoming B&B landlady, who are all cartoony cardboard cut-outs.

The policemen who were involved in that long ago case are also sterotypical seventies coppers. Brutal, hard-drinking, sexist, racist, anxious to look after their own, they are not pleasant men, but circumstances have made them what they are.

Like the other characters their lives have been blighted by what happened, by the actions of one man who lost control.

Central to the the story is retired policewoman Tracy, still haunted by that 30-year-old murder case, who buys a child from a prostitute, hoping to break the cycle of deprivation and abuse - and to make amends for the child who lost his mother and was nver given the chance to live with a loving family.

There is a rather engaging jam-making, scone-baking gangland boss, whose home crowded with photos of his grandchildren; an ageing actress who suffers from dementia, and Julia, Brodie's former lover and the mother of his son.

There is also the mysterious Brian Jackson, another investigator, who is trying to track down the family of a man who spent his childhood in a children's home...

At the end of the book there are clues that another Jackson Brodie is on the way, but I may give it a miss.

If Started Early, Took My Dog is your first encounter with Kate Atkinson then you may think it is a very good book.

But I was disappointed.
Posted by Christine Harding at 8:50 pm