Not a Blue Rinse in Sight

Romantic novels used to be regarded by many as a guilty pleasure to be read (and written) in secret, but it's an image which is way, way out of date, despite an article to the contrary in the Daily Mail, which conjured up a picture of blue-rinsed elderly ladies, clad in pearls, twin-sets and support tights, eking out their pensions by dashing off steamy, sex-filled stories, which their own families are reluctant to read.
Nothing could be further from the truth and members of the Romantic Novelists' Assocation, who had invited the reporter to their summer party and were expecting a serious piece on the modern romantic novelist were, justifiably, more than a little upset. Take a look at the photos on the RNA site (http://www.rna-uk.org/) and you'll see just how elegant and glamorous these women look - and not a blue rinse in sight. More importantly, they are professional writers (some even run workshops and courses offering advice to aspiring writers) who take time crafting and honing their work until they are pleased with the result. And, like professional women everywhere they are intelligent women who juggle their writing careers with jobs, family life, and all kinds of other activities.
OK, some of them do write about sex, and some of it is pretty steamy, but there is plenty of graphic sex in many other literary genres - and once upon a time these novelists were pilloried for stopping at the bedroom and leaving the rest to our imagination. However, the Mail article put great emphasis on telling readers that this particular  group of novelists looked like ladies you’d find arranging the church flowers, or at the Annual General Meeting of the Jam Makers and Knitted Toy Association, and stressing that they didn't look like 'racy' writers (though quite what racy writers are supposed to like I don't know).
And Mail readers didn't get the chance to seee the authors because the paper didn't use any photographs from the party although, apparently, a photographer was in attendance. Instead there were pictures of Barbara Cartland, Catherine Cookson and Jilly Cooper - all well known, certainly, but not necessarily representative of current RNA membership.

At this point, to avoid any accusations of bias, I have to admit while I am  nor a member of the RNA I have friends who are, and I must state loud and clear that until I was made redundant I was a journalist on a local paper owned by Northcliffe's regional arm, so no, I don't like the Mail. In fact, by reading this piece, I broke my vow never to look at the Daily Mail again and found it lived up (or should I say down) to expectations. Amusingly written perhaps, but only at the expense of romantic novelists and their readers. It gave a cliche-ridden, one-sided, patronising view which perpetuates stereotypical images and fails to take romantic novelists (or women) seriously.


It was pretty derogatory about older women in general. Do old ladies, romantic novelists or otherwise, still have blue rinses, twin-sets and pearls? My mother is 84, and neither she nor any of her friends would want to look like that! Some of them may be stalwarts of the WI, local church and various other organisations, and yes, they make jam, arrange flowers, paint , knit and embroider, but they also cut down trees, decorate their homes, repair cars - and even find the time to read romantic novels! Like the RNA members, they are intelligent, well-dressed, attractive, intellligent, feisty women, who desreve better than a few cheap jibes. 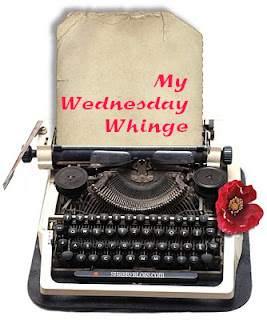 Today's blog is a show of solidarity with my  lovely friends at the RNA, who have the courage to sit and write, rather than sitting and thinking about writing!

It is a Monday Moan, but as I still haven't changed the wording on the typewriter, just imagine it's Wednesday!

Posted by Christine Harding at 10:12 pm