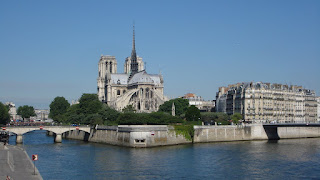 Paris is like an old friend. You don’t see each other for a while, but when you do you pick up where you left off, and you feel as if you’ve never been apart. The city is still there, exactly as you remember it, beautiful and enchanting, providing food for the body and soul – and it still has the power to surprise. 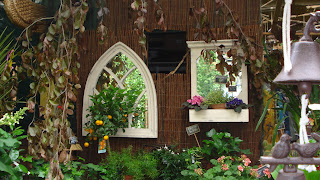 Back home after four days away I’m left with a kaleidoscope of memories: cobbled streets, cafes, apron-clad waiters, chaotic traffic, fountains, books, paintings, food, fountains and flowers.
Start with the flowers: the Marche aux Fleurs, to be precise. Created in 1898, on the Ile de la Cite, it’s the oldest flower market in Paris, and even before it comes into view you breathe in the exotic floral fragrance hanging in the air. When you see the flowers it’s like stepping into some kind of fairy land. You can hardly move for the pots of blooms, blossoms and leafy fronds packed into the narrow aisles. They are inside and out, stacked on the ground, on shelves, on racks, on counters, dangling from roofs, hanging from pillars and posts. And not only pots. There are plants growing in every conceivable container – pots, pans, boots, boxes, baskets... And they come in every shape and colour. Huge, flamboyant, tropical specimens thrive alongside small, traditional, garden favourites. All vie for space with scores of old-fashioned, wrought iron bird cages suspended above your head, and there are bird feeders, ornamental lamps, strings of lights, candles, mirrors and sculptures. 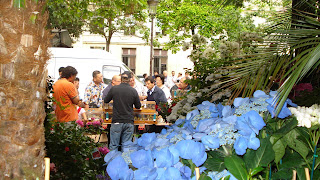 On Sundays you can hear the sound twittering and cheeping from the bird market (Le Marché aux Oiseaux) next door, where there are cages selling all kinds of birds: chickens, pigeons, doves, finches, and love birds with their electric blue and green plumage. In addition there are dozens of small, furry creatures and little, lippety, loppety ‘lapins’ (sounds so much nicer than rabbits I think) with flippety, floppety ears. Animal rights enthusiasts will doubtlessly think the cages are cruel, but the animals all looked happy and well fed. 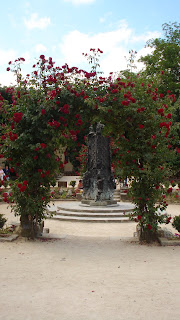 In fact, Paris is a city of flowers. They are crammed into every available space. Every apartment has its balcony, and it seems like every balcony is filled with flowers. They climb up walls and railings; they cascade down buildings; they loop, trail and twine above windows and doors. Homes, shops, offices, restaurants and houseboats are riot of colour and perfume. Small patches of land are transformed into tranquil oases of green – we stumbled across a beautiful little park near Shakespeare and Company, with a sculpture in the centre, and the most wonderful rose arches. I still haven’t discovered what it is called, or why it is there, but it remains one of the highlights of time in Paris, all the more so for being unexpected.
On a grander scale, the Jardin du Luxembourg were as lovely as ever, although it was shut when we arrived due to the imminent arrival of President Nicolas Sarkozy, who was due to unveil a plaque to mark his country’s abolition of slavery in 1848. The entire area – not just the gardens but also the roads leading to them – was closed off and I have never seen so many armed police. As law abiding English tourists we beat a hasty retreat and sat ‘people watching’ as we enjoyed cups of tea at a pavement café (I know, it should have been coffee, but Brits abroad still like their home comforts), then wandered along the Boulevard Saint-Michel. 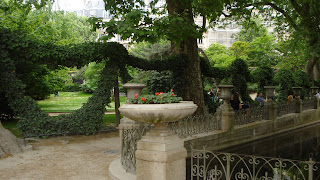 When the ornate gates finally swung open, the elegant VIP guests drifted out, and the Parisian proletariat, unimpressed at being denied access for an entire morning, surged through in a manner reminiscent of their ancestors storming the Bastille. Armed with books, newspapers, food and drink, they reclaimed the area and settled down on their favoured chairs and benches. One lady began painting her toe nails and another started marking students’ essays. There’s always plenty to see here – on a previous visit we once chatted to a needlewoman doing conservation work on a tapestry, while a group of youngsters staged a theatrical performance which moved their watching parents to tears.

The Italian Renaissance garden was created by Marie de Medicis (widow of Henri IV), who was homesick for her Florentine home. It included a fountain built in the form of a grotto, which can still be seen, although it has been moved from its original site. Elsewhere there are formal gardens, with box-edged parterres, walkways, steps, terraces, statues, lawns and a circular fountain, as well as a little ‘wild’ orchard area with a gazebo or bandstand. 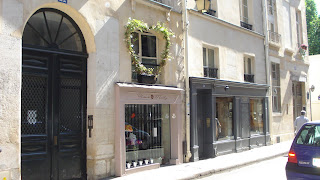 Biggest surprise of the trip was the Ile Saint Louis, which seems to be something of a secret – I never knew existed. It’s a tiny island, off the tip of Ile de la Cite, facing Notre Dame, and is named after Louise IX. Connected to the rest of Paris and its ‘big brother’ island by bridges, it’s totally unspoilt, with quiet, narrow streets lined with tall, shuttered 17th century buildings. At street level some of the shops look as if they hardly changed in the last 400 years: others have been turned into artisan boutiques and galleries – but without losing their character. Walking down one of the roads we heard music and realising it came from a church went inside, to find an orchestra rehearsing in an incredible building, where the somewhat grim exterior was at odds with the beauty of the interior with its gold gilding, paintings and statues. Later, I Googled it and discovered that Saint-Louis-en-l'Île Church (the Church of St Louis on the Isle) was designed by Louis Le Vau, the architect responsible for Versailles. 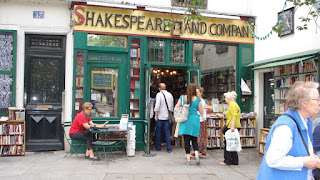 Browsing along the Left Bank I finally found Shakespeare and Company, which I unaccountably managed to miss on an earlier visit to Paris. This legendary bookshop and library was founded in 1919 by Sylvia Beach, and became a focal point for expatriate English and American writers and artists during the 1920s and 30s. Ernest Hemingway describes it in An Immoveable Feast, and other famous visitors of the period included F Scott Fitzgerald, James Joyce, Ezra Pound and Gertrude Stein. The present site, set up in the 1950s, has achieved iconic status and stocks a vast selection of new and second-hand books, making it a ‘must’ for English-speaking bibliophiles. 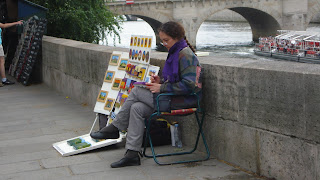 Still on a literary theme, on both sides of the Seine in the Pont-Neuf area you’ll find stall after stall selling souvenirs, old books, new books, maps and paintings – all using small, green, metal boxes as their shopfronts. As you stroll along you can watch artists sketching and painting the scene around them – not as many as in Montmartre, but just as colourful and fascinating. 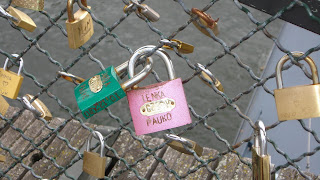 Walking along by the Seine you can look down on wide, flat-bottomed working barges, glass-topped tour boats, beflowered houseboats, floating tearooms and restaurants, and even a ‘Theatre de Magie’. The bridges have their own character and history - including one decorated with padlocks left there as love tokens. And on Sundays, on the towpath between the Quai Anatole-France and Quai Branley, all Paris turns out for a weekly dose of exercise. Skilled inline speed skaters whizz along leaving the less experienced wobbling in their wake; dog owners step out briskly with their pets; cyclists (some with dogs attached to the handlebars on long leads) pedal past; joggers, heads up, legs pounding up and up down, rush by, while some folk take life at a gentler pace, doing exercises at the barriers by the river’s edge, like ballet dancers practising at the barre. Standing out from the crowd is a man skating backwards, arms outstretched, as he encourages his very tiny, very young son, who is trundling towards him on what must surely be the world’s smallest bicycle.

There are other snapshot views of the city.

There’s the fragrant orange pekoe served by an aproned waiter who tells us it is his favourite tea (us too, we decide); a perfect omelet and salad lunch, eaten as we sit in the sunshine, beneath the awning of a café on the Ile St Louis, looking across a narrow strip of water to Notre Dame on the Ile de la Cite, and two small apple tartes, deftly wrapped by an assistant who transforms a single sheet of paper into a container to carry them, complete with a flat bottom and handle.

I like the way the gutters run with water each morning; the lack of litter; the cobbled streets; the pavement cafes and the hidden alleys leading off the main roads. However, just as with an old friend, there things that irritate. There’s more graffiti than I’ve seen in earlier years and the stench of urine in some areas, especially alongside the river, is overpowering. The street scams are still there (you know the kind of thing - demands to sign ‘petitions’, requests to buy ‘gold’ rings), and there seem to be more beggars, especially elderly ones, holding out their cups and asking for cash.

But despite that I still love Paris - after all, you ignore your friends' foibles and idiosyncracies, just as they overlook your own irritating habits. So I hope to return, renew the friendship, reacquaint myself with my favourite haunts - and, maybe, discover new ones.
Posted by Christine Harding at 7:31 pm