The Great Fire of London: Buried Cheese and Burnt Shoes

Today’s anniversary is the Great Fire of London, which began in the King’s baker’s shop at Pudding Lane in the early hours of September 2 – the Lord’s Day, as Samuel Pepys records in his diary. One of his maids woke him at 3am when she looked out of a window and spotted a fire in the Billingsgate area. Pepys took a look, thought it ‘far enough off’ to cause no worry and went back to bed. Little did he know at that stage of the devastation to come. 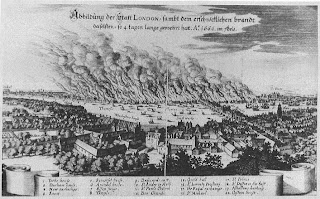 By the time he woke again at 7am the fire was still burning and 300 houses had been destroyed, so he walked to Tower Bridge, one of the affected areas, then spoke to the Lieutenant of the Tower of London, and viewed the scene from a high window before travelling to Whitehall where he broke the news of the disaster and advised the king that buildings in the path of the fire should be blown up, to create a firebreak and halt the flames.
He spent the day watching and writing – much of his account of events over the next few days was scribbled on sheets of paper and transcribed into his diary when the catastrophe was over. As residents fled the flames they flung goods not just into boats, but into the river itself; others carried their possessions in carts and on their backs, while the sick were transported in carts. But, according to Pepys, many people stayed in their houses ‘as long as till the very fire touched them’ – and he paints a touching picture of the ‘poor pigeons ... loathe to leave their houses, but hovered about the windows and balconies till they were some of them burned, their wings, and fell down’.

The fire spread with alarming speed, due to a spell of dry weather, the high wind, and the Mayor of London’s failure to take decisive action at an early stage. Realising that his own home could be at risk Pepys put iron chests in the cellar; took many valuables to a friend at Bethnal Green; moved his wife Elizabeth to safety at Woolwich and buried his wine and ‘Parmezan’ cheese in the garden.

It’s the small details like this which bring the scene life: in the middle of the fire they had no fire to cook on, so he bought cooked mutton from a shop for a picnic with neighbours; he wrote a letter to his father, but couldn’t send it because the post office had burned down and he picked up a piece of twisted, melted glass from a chapel window.
By Thursday the fire was burning itself out, but there were reports of some looting, and by Sunday life was beginning to return to normal. He ordered the cleaning of his house – and it began to rain, which was ‘good for the Fyre’. For months afterwards the ruins smoldered and smoked and were feared to be the haunt of robbers and ne’er-do-wells: Pepys protected himself by unsheathing his sword when he was driven through the city at night.

He himself seems to have suffered from some form of what we would now call post traumatic stress syndrome, and for months afterwards he suffered from nightmares and was terrified of fire and scared that his house would fall down.

Pepys wasn’t the only person to leave us a record of the Great Fire of London. John Evelyn (who corresponded with Pepys) also kept a journal for many years, but has been undeservedly overshadowed by his fellow diarist. His report on the fire has an immediacy which is hard to match. He tells us: “The conflagration was so universal, and the people so astonished that, from the beginning, I know not by what despondency, or fate, they hardly stirred to quench it; so that there was nothing heard, or seen, but crying out and lamentation, running about like distracted creatures, without at all attempting to save even their goods.”

He goes on to write: “The noise and cracking and thunder of the impetuous flames, the shrieking of women and children, the hurry of people, the fall of towers, houses, and churches, was like a hideous storm, and the air all about so hot and inflamed, that at the last one was not able to approach it.”

Evelyn also writes movingly about the aftermath of the blaze, and the difficulty of moving about London ‘clambering over heaps of yet smoking rubbish’ and losing his way as familiar landmarks had disappeared, while the ground was still so hot it burnt the soles of his shoes. Around Islington and Highgate he saw as many as 200,000 people ‘lying along by their heaps of what they could save from the fire’ facing hunger and destitution, but not asking for help. However, some help was at hand because Charles II issued a proclamation for the country to provide provisions for victims of the fire.

Pepys and Evelyn both mention that conspiracy theories abounded (people obviously haven’t changed over the centuries) and the French, the Dutch, and Catholics in general were all blamed for starting the fire and planning an invasion. In addition to describing the horror of the event, both men also try to give a sense of the scale of the disaster, in which some 400 streets were destroyed, and thousands of people lost their homes and businesses. Before the end of month plans for the future were being discussed, and people (including Evelyn and Christopher Wren) put forward ideas for a new modern city with wide avenues and open squares replacing the narrow and crowded medieval roads, but owners insisted on keeping the sites of their destroyed property, so in the end rebuilding followed the old street pattern, although Parliament decreed that buildings had to be brick or stone and flat fronted.

Public buildings were created first, including Wren’s masterpiece, the iconic St Paul’s Cathedral, and he also designed the flame-topped Monument which stands at he junction of Monument Street and Fish Street Hill, near the spot where the fire started.

Should you wish to mark the day I suggest you do so with toasted cheese (from the fridge, not the garden), wine and new shoes!
Posted by Christine Harding at 1:15 pm