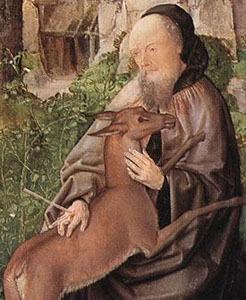 Well, it’s September already, and the year seems to have gone incredibly quickly: ahead of us lies Hallowe’en, Bonfire Night and, of course, Christmas. But let’s not think about that yet, since September has plenty of celebratory days.


Today, for example, is the Feast of St Giles (or St Gilles as the French call him, which somehow sounds and looks much more interesting than plain old Giles) when many towns used to hold fairs in his honour – and Oxford still keeps up the tradition. According to legend he spent many years as a hermit living in the French forest, where he was injured by an arrow while the King was hunting deer: some stories say he lived on milk provided by the deer. At any rate, as a result of this accident St Giles became associated with the sick and disabled, and many Medieval hospitals were named after him.

To mark his day I started re-reading The Leper of St Giles, by Ellis Peters (I love the Cadfael novels) and, since St Giles is reputed to have been a vegetarian I ate home-made vegetable soup, while considering September’s festivals.

The month takes its name from the word septem, the Latin for seven, as it was once the seventh month in the old Roman calendar (before the creation of July and August). The Anglo Saxons called it gerst monath after the barley which they harvested to make a barley brew which, I suppose, must have been similar to the barley wine I used to drink in my student days and haven’t touched since – but perhaps I could try some to celebrate September! Haefest, or harvest month, was another name for this time of year and there are all kinds of traditions connected with the harvest, including corn dollies, symbolic shapes made from the last sheaf of corn to be cut, which brought good luck in the year ahead.

Weather was (and still is) one of the most important factors in a good harvest, and consequently there are all kinds of rhymes and proverbs featuring weather predictions. The first snippet states: “Fair on the first of September, Fair for the month.”

September is also the month of the lost days. In 1752 when England replaced the old Julian Calender with the Gregorian Calendar corrections had to be made, which meant September 3 became September 14, and many people were very upset about their missing days, even though it made things more accurate by bringing the calendar into line with solar time.

Towards the end of the month, on September 23, is the Autumn Equinox, when the sun crosses the celestial equator and moves southward and day and night are almost equal. hemisphere.

And a week later, on the 29th, is the Feast St Michael, with all kinds of traditions and legends – like the one which says this is the last day to collect blackberries, because after this the Devil spits on them.

In fact fruit, especially apples, and vegetables are at their best this month, so take advantage by trying out new recipes – I shall post some of my favourites over the next four weeks, and I’ll also take a closer look at some of the customs and traditions associated with September.

Pic: From Saint Giles and the Hind, National Gallery.

Posted by Christine Harding at 11:41 pm