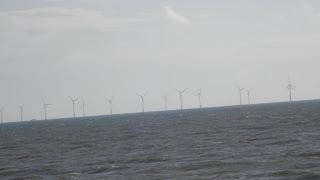 Well, we’re back from the past and off to Windy Walney. To those of you who have never heard of Walney (which is understandable) it’s an island off the tip of Barrow which is (allegedly) the windiest lowland site in England. I can believe this. Whatever the weather is like elsewhere it is always blowing a gale on Walney – and to prove it dozens of wind turbines have now sprouted offshore.

Wind farms are controversial and many local residents hate them, but I rather like them. On bad days they loom out of the mist and murk, their edges so softened you wonder if you’re seeing them or not, and sometimes they seem to disappear completely, but on clear days they stand proud on the horizon, their blades turning and turning as they make electricity.

We stayed at South Walney, which is really isolated, with a salt marsh on the Barrow side, and an incredible beach with masses of sand and rock pools on the other. When you stand and gaze across the salt marsh, with the wind blowing and the birds calling you could be at the end of the world. The marsh stretches out ahead of you, bleak and desolate, but it has a strange kind of beauty and as the clouds race overhead with constantly changing light and shadow the ground below alters from minute to minute, turning through a spectrum of colours. 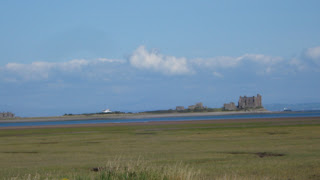 Another constantly changing feature is Piel Island with its ruined castle (built by the abbots of Furness Abbey) silhouetted against the skyline. At high tide Piel is a normal island, surrounded by water, but at low tide the sea retreats and the isle rises from the mud flats like a legendary lost land. There are guided walks over the sands (you couldn’t attempt this in your own) and one year we travelled in a kind of trailer, pulled by a tractor. When the tide is in you can take a boat trip from nearby Roa Island – but however you get there the sea dictates the length of your visit, and if you’re not on time for the return journey you’ll get left behind because the tide won’t wait...

Curiously, Lambert Simnel, who claimed to be Edward VI (one of the Prices in the Tower) landed here in 1487 on his way to do battle for the throne (he lost) and it is believed the custom of crowning the landlord of the Ship Inn as The King of Piel dates back to this period. 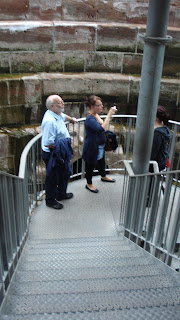 From Walney it’s only a short drive over the Victoria Bridge to Barrow itself, where we visited the Dock Museum, which has been created in an old ‘graving’ or dry dock where ships were repaired. It’s a very individual museum charting the history of the town which has been dominated by shipbuilding. There are models of the ships built here, an alien-looking diver’s suit, a draughtsman’s tools, and tableau showing some of the workshops and building processes, as well as details of the way the workers lived in the 19th and early 20th centuries (at Barrow Island you can see the old red sandstone tenement blocks where the workers lived, which are still in use today).

But there’s more to Barrow than ships. You can find out about Barrow in ancient times, its coal and iron mines, how people spent their leisure time, and the impact of the Second World War on the town, which was targeted by German bombers because of the shipyards. It would have been nice to see an exhibit about Nella Last, whose Mass Observation Diary formed the basis for Victoria Wood’s TV drama, Housewife, 49, but although the books of her diaries were on sale in the museum shop there seemed to be no reference to her. Despite that, it’s of my favourite museums which deserves to be much better known - and it’s free, has a small cafe, good parking and an area outside where you look at part of the old dock and admire the modern ‘waymarker’ sculptures. 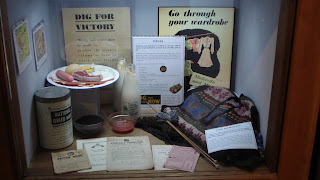 No visit to Barrow could be complete without a visit to the ruins of Furness Abbey, but on the day we visited the weather was so bad that we got as far as the car park, and chickened out, unable to brave the torrential rain and high wind, which is a shame, because it is really beautiful there.

Back on Walney, surprisingly, the weather improved, so The Daughters and I walked along the sandy beach, exploring rock pools, and looking at the wind turbines. We used to hire a caravan here when they were younger, and it was all exactly as they remembered, so it gave them a chance to reconnect with their childhood and meet family they hadn’t seen for several years, which was nice.

As usual The Man of the House and I came home with a list of things we meant to do and didn’t; see the Druid’s Circle, visit the Abbey again, go round a nature reserve (there are two on Walney)... and we didn’t get up into the Lakes at all this year. But at least it means we have something to do on our next visit.

If you want to find out more about Walney, Barrow and the surrounding area, the following sites may help: www.dockmuseum.org.uk; www.english-lakes.com/furness_abbey.html; www.pielisland.co.uk; http://www.walney-island.com/
Posted by Christine Harding at 10:51 am