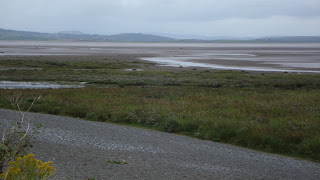 We have been on a Barrovian holiday, which sounds very exotic – like a little known Baltic nation, or one of those strange states that were once part of Russia. Or perhaps it could be a literary landscape providing inspiration for the kingdom of Barrovia which, in my imagination, resembles Anthony Hope’s Ruritania, with heroes and villains performing deeds of derring-do and beautiful maidens embroiled in romantic intrigue. 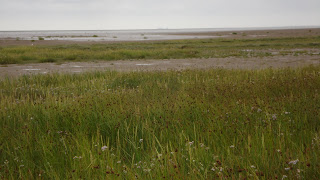 The reality is a little different: we went to Barrow-in-Furness, birthplace of The Man of the House who is, like all things which hail from the town, a Barrovian. That may sound dull, but the Furness Peninsula is as isolated and mysterious as any far-flung country or fictional realm. Jutting out into the Irish Sea on the very edge of the northern side of Morecambe Bay, it’s surrounded by water on three sides, while on the fourth the mountains of the Lake District form a barrier.
We took the campervan (our longest trip so far, in distance and time), staying for three days at Bardsea, and four at South Walney, and The Daughters joined us for a few days. The Bardsea site, set in an old quarry with its sides covered in trees and shrubs, was within walking distance of Ulverston but we were lazy and caught the bus into town (although we have walked in the past). Stan Laurel, one half of comedy duo Laurel and Hardy, was born here (in those days he was Arthur Stanley Jefferson) and the town boasts a statue of the pair, as well as a Laurel and Hardy Museum. Created by fan Bill Cubin it started with just a few photos and scrapbooks but grew and grew. Since Bill’s death his family still run the museum, but it has moved to a new home on the stage of the old Roxy Cinema complex. 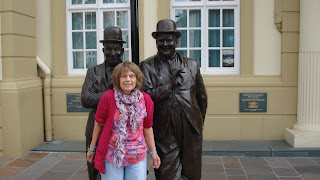 We read about Stan’s early life. Born into a theatrical family he joined Fred Karno’s band of travelling performers, understudied Charlie Chaplin and went to America where, eventually, he teamed up with Oliver Hardy and became a legednd – but he always maintained his links with Ulverston. Best of all, we sat in the 15-seater ‘cinema’ and laughed uproariously at Tit for Tat, in which Laurel and Hardy open an electrical store and get involved in a dispute with the neighbouring grocer, played by Charlie Hall, whose birthday it was on the day of our visit.

The new museum is lovely, and there is certainly more room, but somehow I preferred the old one, housed in an alley off one of the main streets – it was more atmospheric, and I loved the way the walls and even the ceiling were covered with photographs, pictures and other exhibits, and the way visitors squashed into the smallest cinema I’ve ever seen to watch their idols’classic films. 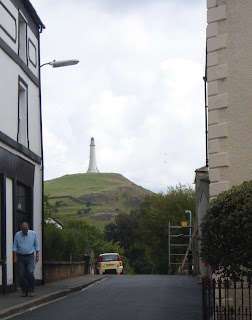 Ulverston’s other claim to fame is its ‘inland lighthouse’, which stands at the top of Hoad Hill and is visible for miles around. Built to look like the Eddystone Lighthouse, it's 100 feet high and is a memorial to Sir John Barrow, another native of Ulverston, who became second secretary of the Admiralty, was famed for supporting voyages of exploration and scientific discovery, was a founder member of the Royal Geographic Society, and wrote biographies and a history of Arctic exploration.
Every time we visit Barrow we plan to walk up Hoad Hill, take a close look at the memorial and maybe even clamber up the 100 steps inside, if it is open. However, we always decide we’re too old, or too unfit, or the weather is too cold, too wet or too windy (please note, it's never too hot in the Furness Peninsula), or we just don’t have the time. Perhaps we'll muster up the energy one of these days.
Another place we’ve never got round to visiting is Druid’s Circle, a prehistoric stone circle at Birkrigg Common, close to Bardsea village, but there’s always next year. Bardsea itself is only small, but it has a beautiful woodland country park and right next door, growing in a narrow strip along the very edge of the shore is the amazing Sea Wood, with records dating back to the 16th century (which means it is officially classed as ‘ancient’). It is believed that the area was once owned by the ill-fated Lady Jane Grey, the Nine Day Queen; timber was felled to supply the shipyard at Ulverston, and in addition there was a copper mine here. 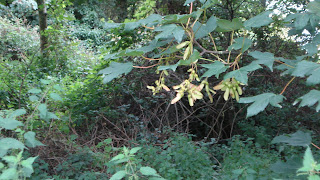 Today it’s managed by the Woodland Trust and its position, soil and plants have made it a Site of Special Scientific Interest, ensuring protection, despite the busy main road which runs alongside it. I love this spot. It’s a magical place, where the world retreats, leaving you in a mini-wilderness: the ground is strewn with boulders which lie beneath tangled brambles, rare wild flowers, gnarled oaks, sycamores and all kinds of other trees, many with branches encrusted with lichens. Sadly, when you’re self catering space is always at a premium, but next time I’ll pack a good plant book and see if I can finally identify some of the species – and I’ll make room for a bird book and binoculars as well. 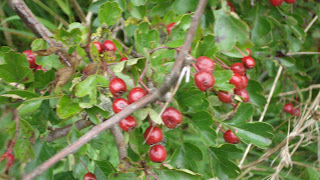 The beach at Bardsea looks very flat, and has stretches of grayish shingle, with some kind of coarse grass – I think it’s called cord grass – at the top, where the solid land merges into the beach, and there’s a lot of sand, but there are also areas of mud flats and salt marsh, and at high tide the sea rushes in with surprising speed, which can make the area incredibly dangerous, especially in bad weather. It’s hard to look across this stretch of Morecambe Bay and not think of father and son Stewart and Adam Rushton who died out there in 2002, trapped on sandbanks by rising tide and thick fog which prevented police reaching them.

Posted by Christine Harding at 9:12 pm