From a Muddy Field to a Memorial 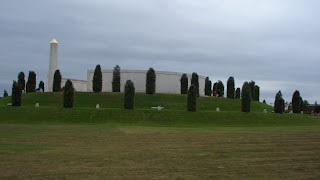 One cold, wet, windy day way back in the late 1990s I stood in the middle of a very muddy field while a man with a map (which kept blowing away) enthusiastically explained his vision for an arboretum which would form a living memorial to all the servicemen and women who have died in action. There was little to be seen, apart from a few tiny saplings struggling to remain anchored in the ground, and a lot of straggly grass, and the site seemed small and noisy, bounded by gravel works and a busy road. 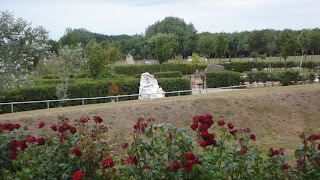 The photographer took his pictures, I scribbled my notes and we returned to the newspaper where we worked, doubtful that the scheme would ever see fruition. But we were wrong and the National Memorial Arboretum at Alrewas, in Staffordshire, is a spectacular success. It is a decade since the site’s official opening – and almost that long since my last visit, so when I returned this week I was knocked out by what has been achieved. It is a truly amazing place, much bigger than I expected, very beautiful, and so peaceful that it’s like stepping out of the world and leaving your own troubles behind. It’s the trees that catch your eye, more than 50,000 of them, all kinds of species, from all over the world, still young, but growing; in another decade they will be awesome. Then there are the sculptures, memorials, swathes of green, green grass, and splashes of scarlet poppies ( real and artificial), forming a tribute to the war dead. 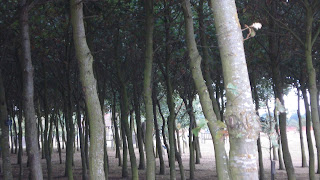 That patch of rough land I viewed all those years ago has been transformed into a kind of sacred space, with some 160 sanctuaries, each created by a different organisation with its own symbolism and style, but each very much part of the whole, linked like side chapels in a massive cathedral. There are commemorative areas from various branches of the Army, Navy and Air Force, as well as the emergency services and groups like Girl Guides, Rotary, Inner Wheel and the WI .
Some of the more ‘domestic’ gardens are really touching, like the Golden Grove, packed with golden coloured plants, a celebration by couples who married at the end of the Second World War and dedicated trees to mark their 50th wedding anniversary, or the edging of decorated pebbles forming a tribute from the Stillbirth and Neonatal Death Society. 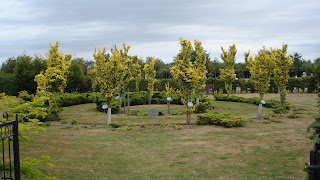 It’s impossible to mention all the monuments, but some will stick in my memory. The Fleet Air Arm have installed a sculpted ship, while the Women’s Royal Naval Service have put up a carved wooden wren, and the Suez Veterans’ plot features palm trees and a ‘canal’ of blue stone chippings.

An avenue of chestnuts has been planted by Police forces from all over the UK, symbolising the chestnut wood truncheons carried by the early law enforcers, and there’s a further link with the past as some trees were gown from conkers gathered at Drayton Manor, once the home of police founder Sir Robert Peel. Lifeboat crews are remembered at a wild shingle ‘beach’ where coastal flowers scramble across the stones, while nearby is a wood dedicated to the Merchant Navy convoys, where 2,535 oak trees represent 2,535 ships lost during World War Two. Consider how many men served aboard each vessel and the death toll is unimaginable. 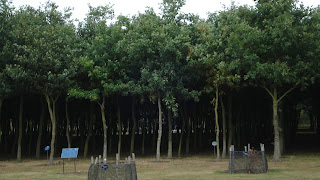 Equally moving is the Far East Prisoners of War Memorial building with its exhibition on the men women and children held by the Japanese. Like many people, I’ve seen The Bridge on the River Kwai, and Tenko, and read A Town Called Alice and history books on this aspect of the war, but nothing, absolutely nothing, prepares you for the full horror of the cruelty and inhumanity inflicted on the prisoners, and the photos, sketches, relics and memories stunned visitors to silence and moved some to tears. 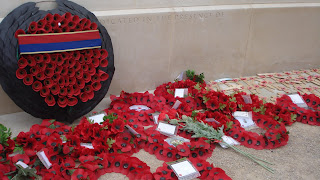 The high point (literally) of any visit to the Arboretum is the Armed Forces Memorial commemorating all the servicemen and women who have been killed since the end of the Second World War. Designed by Liam O'Connor, it stands on top of a mound redolent of prehistoric barrows. As you gaze up, the two curved walls and the trees planted around the two-tiered hill are reminiscent of ancient standing stones, while a gold-topped obelisk points the way to a brighter future. Within the circling walls are two straight walls, and within those is a bronze wreath and two bronze sculptures.
With its banks of poppies and crosses at the base, the scale of the walls where the names of the dead servicemen and women are inscribed is monumental, and it comes as a shock to realise how much space is left, and how many names are likely to be added in the years ahead. It is such a shame the nations of the world can't find it in their hearts to live in peace.

All this may sound a little grim, but it’s not. The arboretum is very tranquil, and very moving but also very uplifting, and it doesn’t glorify war in any way. Its theme could almost be that of Wilfred Owen, who said: "My subject is War, and the pity of War. The Poetry is in the pity." 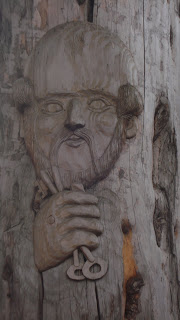 Compassion is central to the ethos of the Arboretum, and the Millennium Chapel of Peace and Forgiveness is a focal part of the site, providing a place where people can pause to reflect, whatever their faith, and it’s the only place in the UK where the Act of Remembrance is observed every day at 11am. The wooden building includes 12 fabulous carved wooden pillars – one for each of the 12 Apostles. 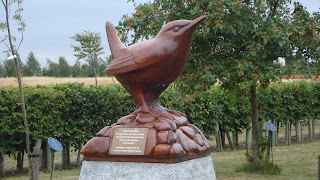 As the Arboretum moves into its second decade an £8 million redevelopment campaign has been launched to fund a Remembrance Centre, and new gardens are continually being added. You can explore the existing development – which includes a café, gifts shop and charity shop with masses of books – every day except December 25. Entry is free but there is a parking charge (£3 at the time of writing) and it’s easy to get around, with masses of wooden benches where you can sit and catch your breath as you reflect on life, the universe and everything.
Full details, including information on the site’s history, funding and the many organisations and volunteers involved, can be found at the National Memorial Arboretum website at http://www.thenma.org.uk/index.aspx
and there also details on the Royal British Legion website at http://www.britishlegion.org.uk/remembrance/national-memorial-arboretum

Posted by Christine Harding at 4:47 pm