Life Is Just a Bowl of Cherries 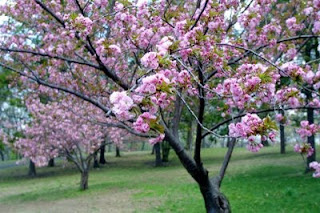 A THREE-YEAR campaign has just got under way to count and map Britain's cherry trees! Isn't that wonderful? I do LOVE Radio 4's Today programme, they have such offbeat snippets alongside all the serious stuff.
People have to record wild and cultivated specimens ensuring, of course, that they know the difference between cherries and other flowering trees.
The campaign is being orchestrated by The Natural History Museum, which is calling for the public's help to count cherry trees, which it calls a 'classic sign of spring'.

It is hoped the findings will allow researchers to map the trees and find out if changes in climate are affecting their flowering.

Until the early part of the last century, cherry trees were widespread in England, with many towns and villages marking the harvest with popular cherry fairs, and the fruit was sold on to big towns and cities.

But, according to CherryAid, in the last 50 years Britain has lost 90 per cent of its cherry orchards and now imports around 95 per cent of the cherries we eat. Now the organisation, which campaigns to unite chefs, growers, producers and consumers to save the British cherry, has linked up with FoodLoversBritain.com
All kinds of events are to be held throughout the year, including a National Cherry Day on July 17 - I'll be trying to find out more about that later in the year, and to feature some recipes using cherries.
In the East, unlike Britain, people celebrate the blossoming trees rather than the harvest of fruit.  Japan's hanami (hana means flower and mi means to see) festivals are famed throughout the world, and date back almost 2,000 years.

Once upon a time the royal courts, aristocrats, musicians and poets gathered beneath the boughs to view the cherry blossom.  Today the Japanese still hold cherry blossom festivals throughout March, April and May and there are parties under the trees as people eat, drink and sing.

A favourite food during the season is hanami dango, steamed dumplings, made from rice flour, and dyed green, white and pink - perhaps the colours represent the leaves and blossoms.

Aditionally, the Japanese believe the massed blooms on cherry trees symbolise clouds and are a metaphor for the ephemeral nature of life.


Meanwhile, any discussion on cherry trees gives me an excuse to re-read AE Housman's poem, from A Shropshire Lad. As it is one of my favourites, I share it here with you.


Loveliest of trees, the cherry now
Is hung with bloom along the bough,
And stands about the woodland ride
Wearing white for Eastertide.
Now, of my threescore years and ten,
Twenty will not come again,
And take from seventy springs a score,
It only leaves me fifty more.

And since to look at things in bloom
Fifty springs are little room,

About the woodlands I will go
To see the cherry hung with snow.

*To take part in The Natural History Museum survey, go to http://www.nhm.ac.uk/ and key in cherries in the search box.
* More about cherries at:
http://www.foodloversbritain.com/FoodMatters/FoodLovers-Britain-CherryAid/
http://www.kentishfare.co.uk/media/foodtrails/Cherry_Ripe_E-bro.pdf
Posted by Christine Harding at 10:54 am