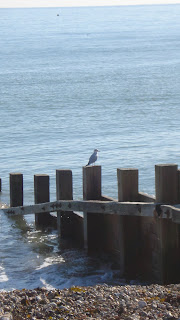 IT is Wednesday, so it should be a Whinge Day, but instead I am having a Wednesday Witter about the seaside and posting some pictures taken at Bognor during our mini-break.

The town owes its regal appellation to King George V, who recuperated there following an illness. Residents were so delighted with this honour they asked his permission to add Regis (from the Latin for king -rex, regis)to its name.

Their royal visitor was less impressed and is alleged to have uttered the immortal word 'Bugger Bognor' on his deathbed!

When I was a child we holidayed in and around Bognor on several occasions, and I remember a bustling seafront, packed with deckchairs on the shingle beach, and crowds of shrieking children paddling in the sea.

But on Monday, despite the blue sky and sunshine, it had the deserted out-of-season look common to most seaside towns at this time of the year, and it seemed smaller and less prosperous than I remembered.

Most of the businesses based in brightly coloured wooden huts on the promenade had already locked up for the winter but a few were still plying their trade.

I was tempted to buy a shiny, metallic windmill, stuck into a polystyrene base sculpted into sand-dunes and painted a particularly bilious shade of yellow - but the display was so cheery and cheeky it seemed a shame to disturb it. 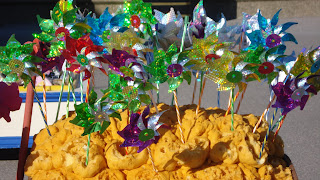 Instead we sat on garden chairs beside a strangely impermanent-looking cafe, and sipped scalding hot tea in paper cartons as we watched the waves break on the shore, where a small boy, undeterred by the lack of sand, set to with his plastic bucket and spade to create a stonecastle, surrounded by a traditional moat. Back in Chichester unexpected pleasures included the beautiful rainbow light filtered through the stained glass windows of the Cathedral and reflected on walls, floors and ceilings - and the discovery of the Arundel Tomb, which inspired the Philip Larkin poem.

Here, hand in hand, lie Richard Fizalan, the 13th Earl of Arundel and his second wife Eleanor, with their dogs at their feet, just as Larkin desribed.

"Side by side, their faces blurred,
The earl and countess lie in stone,
Their proper habits vaguely shown
As jointed armour, stiffened pleat,
And that faint hint of the absurd -
The little dogs under their feet."

Close up, the white stone effigy has an almost chalky quality, with a powdery residue on the surface which softens the hard stone, and makes the couple seem more human.

On a pillar next to the tomb hangs Larkin's poem, so what better way to end this post than by quoting the final stanza.

"Time has transfigures them into
Untruth. The stone fidelity
They hardly meant has come to be
Their final blazon, and to prove
Our almost-instinct almost true:
What will survive of us is love."
Posted by Christine Harding at 7:04 pm