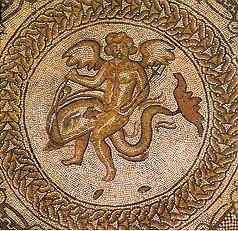 WE have just returned home after a few days in Chichester, where we wandered around the town centre, which seems surprisingly unspoilt, and visited the cathdral, its worn stone floors and walls spattered with multi-coloured splodges of light where the sun streamed through the stained glass windows.

We took a trip to Bognor, where we sat and watched the waves break on the shingle beach, while above us the sun blazed out of a cloudless, bright blue sky.

But best of all we saw the remains of remains of the Roman Palace at Fishbourne, and marvelled at the skills of those who created it.

Discovered in 1960, while work on a new water main was being carried out, Fishbourne boasts the finest collection of mosaics in the UK, preserved in situ within a specially constructed building which follows the layout of the original north wing.

From viewing platfoms above the floors we walked through corridors, courtyards and rooms, taking a close look at ovens, a burial and, of course, the incredible mosaics.

A few are virtually complete, while others have survived as fragments. New mosaics are laid on top of old, and worn areas patched with tiny tiles, with no effort to match design or colour.

It made us realise that these aren't works of art, but 2,000-year-old floor coverings, which were repaired and replaced to meet the changing demands of fashion and family life, just as we alter the decor in our homes today.

In addition we examined remnants of the underfloor heating system, and what is left of the bath suite.

Outside formal garden that would once have been at the centre of the four wings have been replanted in bedding trenches which the Romans dug out of the clay and gravel soil, then filled with loam.

The area has been planted with species known and loved by the Romans - roses, grapes, box and herbs, with a gardening exhibition in the potting shed, and an outdoor eating area.

It was, presumably, the equivalent of a moden patio and barbecue, and it seemed to bring the ancient inhabitants of Fishbourne a little closer.

Exactly who those inhabitants were, however, is still something of a mystery. No-one is certain, but the most likely candidate seems to Tiberius Claudius Cogidubnus, chief of a British tribe, who welcomed Roman rule and the fine things it brought and was honoured by them in return.

His opulent home, built in the early part of the first century AD, was altered and enlarged by his descendents.

In its heyday the palace must have been magnificent - a statement of power and wealth, created by the finest craftsmen in Europe and designed to impress visiting tribal leaders and Roman VIPs, it was the equal of anything to be found in Rome itself.

Today only only remnants remain, but modern archeological techniques mean the jigsaw of the past can be pieced together to help show what life was like 2,000 years ago.

Much of the evidence is on show in the site museum, which contains artifacts, information, models, a reproduction room and details about the excavations.

Most touching of all were terracotta tiles marked with a bare foot, a child's shoe and an animal's paws. Did a child chase a pet across the tiles as they were dried prior to firing? And did an adult chase the child away?

It was another of those moments when the past seemed to be very close.
Posted by Christine Harding at 5:48 pm