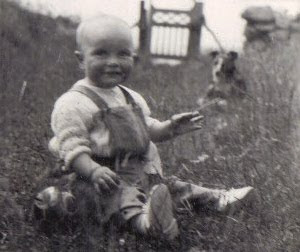 Me, in the field by my grandparent's cottage at Porthaw aged, I think, about 18 months. The gate was propped up with wood each side - I don't think it actually opened, which was just as well, for no-one ever visited. Perhaps it made my grandmother feel as if she was living in a 'proper' home, where people might call.

MY grandfather should have been a pioneer. Instead, as he cycled home from work he stopped off for a drink – and bought a tumbledown Irish cottage and 27 acres of land from a man in the pub. That was back in 1947, when he followed his dream, my grandmother followed him, and my uncles followed her. My mother, just 19 years old at the time, stayed in England, met my father, got married and lived happily ever after – which is a story for another day.

It’s my grandfather’s story which concerns me here. London born and bred, he worked as an electrician ‘on the buses’, but he had ambitions to plough and till the land. For years he cultivated fruit and vegetables, and kept various animals: pigs, goats, chickens, rabbits, which his nearest and dearest were left to care for while he went off to his ‘day job’.

His search for the perfect patch of land took him through a succession of homes, each one smaller and more dilapidated than the last although, conversely, the land available grew larger with every change of address. The more ramshackle the house, the more derelict the land, and the more isolated the site, the better he liked it. 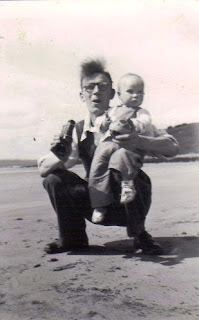 I see the sea: My father and I on the beach at Porthaw.


If there was an easy way to do things and a hard way, you could rely on him to choose the latter. Perhaps he felt he had to prove himself because physically he was such a small man – not much more than five feet tall, but belligerent with it.
Anyway, he certainly chose a difficult path and must have needed all his enthusiasm and ebullience to cope with his new life. Indeed, I’m not sure his family ever reconciled themselves to just how tough things were: conditions were primitive, even for rural Ireland in the 1940s.

On arrival - he had never previously seen his acquisition – he found the cottage had four walls and a roof (which leaked), but that was all. There was no door, no glass in the windows, no gas, no electricity, no running water, no toilet facilities, and no road. It was, says my mother (who made frequent visits to see her parents), the Back of Beyond, bleak, desolate and miles from any other human habitationThe cottage was set in a field, with a stream running through it, leading down to the rocky foreshore, and beyond that a vast expanse of sand, and beyond that the sea. Initially water came from the stream, until my grandfather fixed the well, and there was some kind of chemical loo (don’t ask, says my mother). 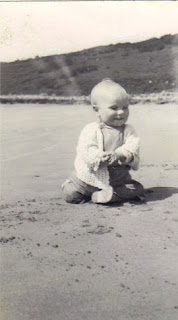 Beach Baby: Me, aged around 18 months, on the beach at Porthaw.
Food was cooked on the open fire, until an old iron range was installed. And as there was no road this had to be hauled along the uneven track my uncles created on the rocks and rough land that ran alongside the edge of the lough. Glass, furniture, shopping, tools, household equipment all had to be transported the same way – carted from the town of Buncrana to the edge of the makeshift path, then carried two miles or more to the cottage.

Of my grandfather’s 27 acres of land only half an acre could be used for crops or animals: the remainder was thick with boulders that could not be dug out. My uncles’ efforts to blast the rocks from position using some dynamite they acquired from an unknown source merely left the area scarred with pockmarks, for beneath the rock was – more rock.

Just as he had done in England, while he struggled to scratch a living from the land he had a job, this time as an electrician with the Swilly Bus Company. He was, I believe, entitled to free bus travel, but chose to cycle, crossing the border in and out of Derry on a daily basis, so he must have been incredibly fit.

Eventually he admitted defeat, sold up and bought another house and some more land (which proved to be equally unproductive) up in the hills of Donegal, away from the sea. Life there, though never easy, was a little more comfortable for my grandmother, and a little less isolated – although she must have been desperately, desperately lonely for much of the time. Porthaw Beach - Buncrana, Donegal, Ireland. Holiday homes have now been built on the site where my grandparents lived. There is access by road, and the track my uncles created along the edge of the rocks has been replaced by a modern footpath.
Originally uploaded by Donegal Cottage Holidays
Posted by Christine Harding at 8:24 pm