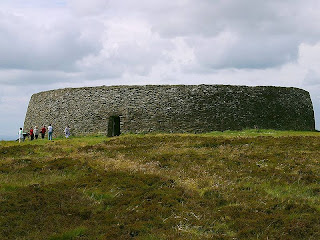 WHEN I was a child we used to holiday in the north of Ireland (geographically that is, not politically). My grandparents moved to Donegal after the Second World War, setting up home on the Inishowen Peninsula, a magical, mystical place, cut off from reality by the water which surrounds it on three sides.

Up the road and a bit from my grandparents’ house was Malin Head (you may recognise the name from the Shipping Forecast), the most northerly point in all Ireland. There we sat on the edge of the word, huddled under a huge umbrella as we watched the rain sweep in from the sea, and my grandfather brewed tea on an antiquated Primus stove. On the beach granite and quartz pebbles glistened, their jewel-like crystals shining black and green and pink and red through the gathering gloom and mist.

It was this view of the past that came to mind while I was working on my latest OU assignment, showing how Irish nationalists used ‘created tradition’ to forge a national identity, and it made me re-examine my own my own memories in a completely new light and set them in a different context.

Take the Grianan of Aileach for example. Up the road and a bit less (everything in Ireland was measured like this) there it stood, an ancient stone ring fort growing out of the heather on top of Greenan Mountain, with the cold wind blowing around and over it. Once the seat of the royal O’Neills, it was, according to legend, blessed by St Patrick, who left his footprints behind when he paid a visit – but no trace of them could be seen on our outings, however hard we searched. One story says it was raised by the Dagda, the ‘Good God’ of the Tuatha de Danann, while another tale claims the Celts gathered here to worship their sun goddess. The truth is lost in the mists of time, but Neolithic activity could date back to 2,000 BC, or even earlier.

Even as a child I could sense the power and history of this place. It was (and, I hope, still is) awe inspiring: it’s a great, roofless, circular, stone fortification, with walls so thick the entrance is like a tunnel. Terraced steps and ledges, just wide enough to walk along, run around the inside of the wall, giving the most spectacular views. Look inland and you can see five counties stretched below you like a living map. Look seaward and you can see Lough Swilly to the west, Lough Foyle to the right, and beyond them the great Atlantic Ocean, with nothing between us and America. 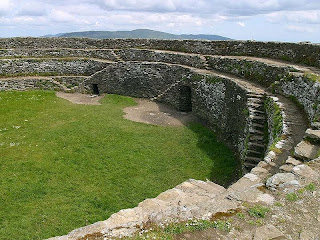 Inside the Grianan (http:://pdphoto.org Jon Sullivan).

In actual fact much of the Grianan is a reconstruction, erected in the 1870s by Irish antiquarian Dr Walter Bernard, who was concerned about the monument’s dilapidated condition. It was left in ruins as early as 1101, following a raid by Murtogh O’Brien, King of Munster, who ordered each of his soldiers to take away a stone from the fort. In the ensuing centuries more stonework disappeared, and the remains fell into disrepair, falling victim to age, weather and souvenir hunters - until it was rescued by Dr Bernard.

As a child I imagined him as a wealthy but dotty ‘gentleman’ antiquarian, passionate about preserving the past. That may well have been true, but the project certainly fits with the ideals of Ireland’s burgeoning nationalist movement, which was striving to create a national identity while calling for independence from England. To this end they ignored 700 years of English rule and focused instead on the period before the 12th century. Policies of Gaelicisation meant greater value was put on Ireland’s ancient buildings – the Celtic churches, round towers and Neolithic monuments which owed nothing to English culture but represented a golden age in Irish history, and boasted links with the mythical heroes and holy men of the distant past (Laurence A (2008) Ireland: The Invention of Tradition, in Moohan E (ed) Tradition and Dissent (AA100 Book2), Milton Keynes, The Open University).
The Grianan’s importance is shown because before Dr Bernard took personal charge of the reconstruction, nationalists were involved in repairs. In the early 1870s the Irish Irelanders spent Sunday afternoons working on the site, assisted by members of the Gaelic League and the Gaelic Athletic Association (Sean Beattie, Ireland in Old Photographs – Donegal, http://unknownswilly.orgfree.com/griananbernard.html).
Dr Bernard used information gained from his historical researches to recreate the Grianan by piecing together the tumbled stones from the collapsed fort – but since much of the structure was missing he augmented his supply of authentic material with other stones found around the area. This action, together with the actual nature of the restoration he undertook, has been questioned over the years, because some historians felt the end result was not authentic.

Almost a century later there was similar criticism of Professor Michael O’Kelly’s excavation and recreation at Newgrange. Over the years both men have been accused of compromising the truth with their interpretations of ancient remains, rather than simply stabilising the relics. In years to come new evidence may show their work was flawed: meanwhile their view of the past has helped shape the way we see Ireland and history. 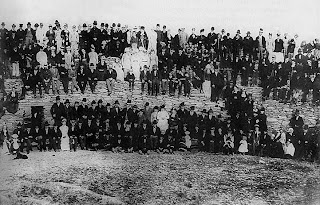 This photo, from Sean Beattie's, Ireland in Old Photographs - Donegal, Bigger/McDonald Collection, shows workers at the Grianan of Ailech during reconstruction in 1878.
Posted by Christine Harding at 8:45 pm