Today marks the introduction of the first London bus with an enclosed upper deck in 1925 – an anniversary carefully selected for your delectation and delight as a mark of respect to my grandfather, who was an electrician on the buses.

Born in 1903, Grandpa must have been a very modern young man when he was apprenticed, because the London General Omnibus Company didn’t install electric lighting on its vehicles until 1913, with headlights being fitted the year after that, so it must still have been quite innovative, and I can imagine his father, who was a tailor, moaning about young people with new-fangled ideas, and saying he would be better off with a more traditional job. 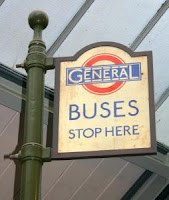 When my mother was very small, around 1929 or 1930 I think, Grandpa moved his family out of London to Egham, in Surrey, and cycled backwards and forwards to ‘the works’ at Chiswick – a round trip of about 30 miles a day. As an employee he could have got free travel aboard a bus but, as I’ve said in a previous post, he liked to do things the hard way (http://chriscross53.blogspot.com/2011/02/day-my-grandfather-bought-cottage-in_28.html).

Eventually, after the Second World War, he moved to County Donegal, taking his bicycle with him. There he found a similar job with what is now the Loch Swilly Bus Company, and continued to cycle to work every day along a slightly shorter but much hillier route, negotiating Irish wind and rain, steep slopes, rough tracks and twice-daily encounters with customs officers with his usual irrepressible bravado.

But back to the buses... it seems they came a long way in a short time, for the first one to be operated by a petrol engine was  introduced as an experiment in 1899, with permanent services set up five years later, when Grandpa was just a year old. I like to think of him, first as a toddler, then as a small boy, fascinated by the rapid changes in this new form of transport, watching the buses as they drove past.

Initially they looked little different to the old horse-drawn vehicles, (the last of the LGOC’s horse-drawn buses was taken off the road in 1911) and many of the changes which took place over the early years had to be improved the Metropolitan Police. At first drivers sat in the open air, behind their engines, then they were given a seat beside the engine and finally, in 1930, were provided with safer, enclosed cab areas.


Passengers on the open-topped upper deck were provided with wet-weather canvas covers, and other early improvements to services included night buses, set up in 1913 for postal employees and shift workers.  During the First World War almost a third of London’s buses were requisitioned by the War Office, and were used to move troops and equipment, to hold anti-aircraft guns – and to house the pigeons which provided communications along the front.
After the war buses became even more popular, and stops were introduced: there were 59 in London in 1919, compared to some 17,000 today. Buses became bigger, faster and more reliable, and the network of routes grew larger and larger. In 1921 the LGOC centralised all maintenance at the new Chiswick Overhaul Works (where, I assume, my grandfather worked), trimming the time taken to overhaul a bus from 16 days to four – a saving of 12 days.

New vehicles were designed and built by the Associated Equipment Company at Southall, which opened in 1927, and hard on the heels of covered buses came other improvements, like pneumatic tyres and upholstered seats, as well as the Greenline service which took people to more rural areas outside the city (including Egham).

The iconic red colour of London’s buses was established by LGOC (before that there were different colours for different routes). The company, formed in 1859, quickly became the largest bus operator in the capital, but in 1933 it joined with other transport firms (both privately owned and run by local authorities) to form London Transport, which then became responsible for buses, trolley buses, trams and Tube trains.

It’s worth remembering that during the 1920s and 30s London’s buses were the envy of the world, and that hidden behind the drivers and conductors who dealt with the public was a huge workforce of people like my grandfather, who ensured the vehicles stayed in tip-top condition.

If you want to know more about the history of London’s buses, then take a look at the London Transport Museum website at http://www.ltmcollection.org which is packed with information and images, and provides a fascinating trawl through 100 years or more of transport history.

And, of course, there’s only one-way to mark the anniversary – take a trip on the top deck of a bus... or, should this prove difficult, why not sit back enjoy A Transport of Delight with Flanders and Swann, the late, great comedy duo, who are every bit as funny now as they were when this was released way back in 1957... Just click on the link and see what you think... http://www.youtube.com/watch?v=7yHrpPRYgYM
Posted by Christine Harding at 8:34 am