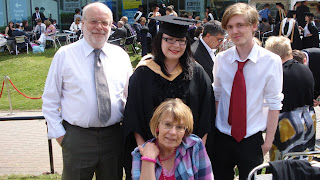 OUTSIDE it is hot and sticky. A jazz band plays and all around us champagne corks pop, adding high percussive notes to the music.

It’s like a garden party. The women keep cool in floral frocks and spiky heels, while their perspiring menfolk shed suit jackets, loosen their ties and tug at the collars of their crisp shirts.

Brothers, sisters, boyfriends and girlfriends, all decked out in their summer finery, wander around clutching bottles of pop and digital cameras.

Then there are the students themselves looking smart, glamorous and oddly grown-up in the gowns and caps which cover their new outfits, smiling as if they would neer stop.

We sit at one of the tables laid out on the grass in front of the university while Younger Daughter disappears to meet friends, collect her own cap and gown, and pose for an official portrait.

When she reappears I fight to hold back the tears as I remember her on her first day at nursery, when she was so shy she wouldn’t speak to anyone and she refused to let go of my hand – so I spent the morning at nursery with her!

Even The Man of the House looks a little watery eyed as he gazes at her. Unusually he is wearing a suit, in honour of academic prowess, which is more than he did for his own graduation, when he turned up wearing jeans and a baggy jumper.

For some reason he is particularly intrigued by the hood on Younger Daughter’s gown: green, edged with apricot and white fur, it is a thing of beauty, but she is too excited to stand still for a photograph.

Inside it is hot and sticky. A saxophone quartet plays as we all file into the Octagon, where the graduation ceremony takes place.

The students sit in neat rows at the front, staring straight ahead, leaving parents craning their necks as they try to recognise their offspring.

Then, a trumpet voluntary sounds and VIPs process onto the sage. The assembled University Staff, Honorary Graduands, Public Orator, Senior Officers of the University, Civic Dignitaries, Mace Bearer and Presiding Officer, all resplendent in their colourful robes, take their seats.

Finally, the ceremony gets under way and we clap until our arms and hands ache as the students march, one by one, up the steps and across the stage, to accept their certificate from Professor RAL Jones, a Pro-Vice-Chancellor.

Regrettably, my efforts to capture Younger Daughter’s big moment for posterity prove unsuccessful as I mistakenly endeavour to operate the camera while clapping…

It seems very formal, a little archaic – and a million miles away from Sheffield’s council estates and the city centre.

The proceedings are broken up by the presentation to two lecturers of Senate Awards for Learning and Teaching, and the conferment of an honorary degree on Professor John C Wingfeld for his research on the environmental and endocrine control of reproduction, territorial behavior and migration in vertebrates.

The simple explanation, for people like me who don’t understand science, is that he is investigating the way creatures deal with climate change.

Eventually the last student crosses the stage, and the Pro-Vice-Chancellor addresses us all, makes his speech, highlights the importance of education and urges the students to applaud their families for providing support.

Then, led by the Mace Bearers, the platform party files out of the hall., followed by the students and, last of all, the parents.

Outside is a melee as several hundred students are reunited with their nearest and dearest.

There are more photographs as young people hug and kiss, and say farewell to the friends they have shared their lives with for the last three years. But gradually they drift away, still smiling, to return their hired caps and gowns and begin their new lives.
Posted by Christine Harding at 11:20 pm