A Little Rule or Beginners 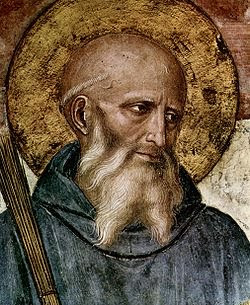 Saint Benedict. Detail from a fresco by Fra Angelico.
YESTERDAY I decided to be brave and drive to my mother’s, rather than catching a train like I usually do. In a bid to avoid the traffic I set off at 6am, to avoid the traffic, and managed to get lost on the motorway!
I ended up on the M6 (I was actually headed for the M5), which was more than a little alarming. However, I managed to find my way back on to the M42 – at which point a picture of an oil can appeared on the dashboard, various other lights started flashing, and the car kept bleeping at me, so I drove home, very, very slowly.
Next time I shall stick to the train!
Anyway, now for something completely different. Today is the feast day of St Benedict, without whom Ellis Peters would have been unable to create her sleuthing monk Cadfael.
Benedict of Nursia (so called to prevent confusion with any other saint of the same name) established the Rule which still forms the basis of monastic life, and is regarded as the father of Western monasticism.

Now I’m not religious (I’m not even a Catholic), but I love all those tales about the saints – they are such a fascinating mix of fact and fiction, history and hearsay, hi-jacking incidents from other stories to suit their purpose.

Some are just plain bonkers and information on others is scanty in the extreme, but the life of St Benedict seems relatively well documented.

His ‘little rule for beginners’ as he called his work was not aimed at ordained clerics, but at laymen who wanted to live their life according to precepts described in the Gospels. It contains spiritual advice, as well as guidelines on the efficient administration of a monastery, and how monks should work and live together.

Written in the turbulent sixth century it showed that establishing an ordered way of life gives stability and security.

Obviously, it is suffused with faith and the need to glorify God in everything, from menial tasks and manual labour to prayer.  There is an emphasis on obedience and humility and everything the monks do must revolve around the Divine Offices of Vigils, Lauds, Prime, Terce, Sext, None, Vespers and Compline.

But, surprisingly perhaps, Benedict is very compassionate, warm and human. Some years ago, out of curiosity, I bought a copy of The Rule of St Benedict during a trip to Glastonbury and found it quite intriguing.

You may think he is a bit of a control freak, but Benedict wants monasteries to be well run and monks to be happy and joyful – and he acknowledges the freedom of the individuals to make their own choices (though there are penalties for misdeeds.

Every aspect of life is covered, including clothing (the monks must not complain about it, but the abbot must make sure it fits) and food – monks on kitchen ate and drank an hour early so they could serve their brothers ‘without grumbling and hardship’.

Born around 480, the son of noble Romans, as a young man Benedict abandoned his studies and chose to live his life according to precepts laid down in the Gospels.

Living alone in a cave he gained a reputation for holiness, and was invited to be abbot of a neighbouring monastery, where the monks tried to poison him. But when he blessed his food and drink a raven took the bread away and the cup shattered (since when, apparently, his name is invoked against poisoners).

Servants who have broken their masters’ possessions may also appeal for his aid, as can the dying (because he foresaw his own death in 547), schoolchildren and coppersmiths. In addition, he is the patron saint of Europe (I didn’t even know Europe had one).

He is said to have founded 12 religious communities, each with 12 inhabitants and a supervisor, while he lived in a 13th establishment with his chosen followers, but the Benedictine Order was founded long after his death.

According to Benedict, 'idleness is the enemy of the soul', so you could mark his feast day by tidying the house or doing some gardening.

Personally I intend to pay my own small tribute by reading Cadfael and doing some embroidery.