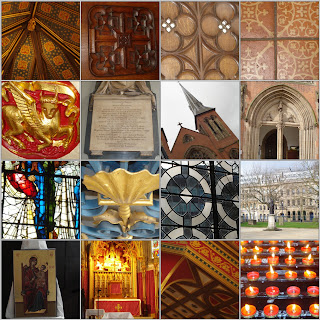 CATHEDRALS, bookshops, tea and friendship illuminated my day. A friend and I went to Birmingham, where we visited both branches of Waterstones, both cathedrals (the Anglican and the Catholic) - and sat down a couple of times to rest our feet and enjoy a hot drink (coffee for her and tea for me).

Bookshops, obviously, are always a joy, especially as Tamworth doesn't possess a proper bookshop. I went intending to buy another copy of Seamus Heaney's Burial at Thebes since, much to my annoyance, I lost the copy I bought recently and desperately need a replacement as it is part of my OU course. Unfortunately neither branch had a copy, but helpful staff at the New Street store have arranged to get one sent over from another shop - so I bought an edition of Sophocles' Antigone instead.

Then we headed off for the St Philip's, the Anglican Cathedral, with its fabulous Burne-Jones windows, their glowing colours so intense that on first viewing they almost shock. The windows were donated by the artist, who was born nearby and was baptised in the church. Originally built as a parish church in the early 18th century, St Philip's didn't become a cathedral until 1905, so lacks the ancient feel of places like Lichfield or Chichester, and is quite small - it is, apparently the third smallest cathedral in England (I sometimes how statistics of this type are collected and analysed, and who carries out the work - does someone travel around the country with a tape measure checking out the size of cathedrals and historic budilings?)

Anyway, although the building is described as Baroque, which I always think of as being very decorative, it seems almost plain, despite the imposing columns, the gilding and the beautiful wrought iron altar rail. But it is a lovely, friendly place, providing an oasis of calm in the middle of a busy city, and it plays an active role in the community for as well as being a place of worship it hosts a packed programme of concerts and is also involved in a project to help the homeless.

St Chad's, Birmingham's Roman Catholic cathedral, is very different. Designed by Augustus Pugin the greatest exponent of the Gothic Revival, it is incredibly ornate. The impact of the exterior is a little lost now, with a constant stream of vehicles passing by, and modern buildings crowding in, so nothing prepared me for the blaze colour and decoration as I walked inside. Tiles, floors, doors, windows and ceiling - everything is carved and painted and gilded and patterned within an inch of its life. It could be tacky, but it is absolutely glorious, and I could only marvel at the genius of its creator, for Pugin not only designed the exterior, but also the interior, as well as the church furnishings and vestements for the clergy.

Later alterations and additions were carried out by three of sons and, later still, by his grandson, who all held true to his ideals. Even though the building is based on Medieval churches, it remains irretrievably modern - because, presumably, it has not yet had time to fade and weather - but it's worth remembering that in the Middle Ages, before the Reformation, many English churches would have been brightly painted and decorated.

We browsed in the cathedral's excellent bookshop before heading back home - where we relaxed over more tea and discussions about favourite books and poems... all in all in was a lovely and interesting day.

Posted by Christine Harding at 5:12 pm