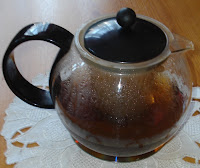 TODAY, let’s drink a toast to... tea! Or, to be more precise, to Charles Grey, the second Earl of Howick, who was born on this day in 1764 and after whom Earl Grey tea was named. However, although he is best known for this delicate, fragrant brew, Earl Gray deserves recognition for his other achievements, which were far more important.

A Whig politician, he became Prime Minister in 1830, serving a four-year term of office. During that time he was responsible for the introduction of the Reform Act, which gave the vote to most British men, and the abolition of slavery throughout the British Empire.

According to one story, while he was PM a member of a diplomatic mission to China saved the life of a Mandarin – who was so grateful he sent the Earl a specially scented tea. The blend was copied, became extremely popular in Britain, and came to be known as Earl Grey tea. Other legends claim it was the Mandarin’s son who was saved, and give an earlier date for the gift.
Not only is there dispute about the Earl Gray’s origin, but there is also argument about the type of tea which should be used - some people claim it is not Chinese at all, b

ut a mix of Indian and Ceylon. However, Jacksons of Piccadilly claim that Lord Grey gave the original recipe to them, and maintain it should be made from black Chinese leaves.

What is not in doubt is the flavouring which gives this beverage its unique taste. Bergamot oil is the magical ingredient, obtained not from the English garden herb, but from a bitter citrus fruit known as the bergamot orange.

Earl Grey tea can take a little getting accustomed to, especially if you favour the kind of brew which makes the spoon stand upright. Chinese tea has a very delicate flavour, and the addition of bergamot gives it a lovely lemony, flowery kind of taste – and the fragrant aroma is quite heavenly. It smells of summer and sunshine, and conjures up pictures of tea on the lawn in a bygone era, with damask ta 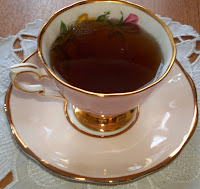 If you’re feeling down, a sure-fire way to lift your spirits is to make Earl Grey (preferably with loose leaves, not tea bags), in a ‘proper’ china pot (sadly, I dropped mine, so am making do with a glass ne instead) let it brew for a few minutes, pour it out (don’t forget the tea strainer!) into a beautiful china cup, with a matching saucer… shut your eyes, take a deep breath, then open your eyes (it’s never a good idea to consume hot drinks while your eyes are closed), take a sip – and enjoy.

You can drink it as it is, with milk or, better still, with a slice of fresh lemon – and a home-made shortbread biscuit. It may sound a long-winded way of brewing a ‘cuppa’ but, believe me, Earl Gray tea is something special, and the ritual i

nvolved in making it just adds to the magic.

If you need more detailed advice, then the late Douglas Adams wrote a brilliant piece on making Earl Gray tea (aimed at visiting Americans) which you can find at http://www.bbc.co.uk/dna/h2g2/A61345

Failing that, you could boldly go and follow the example of Captain Jean-Luc Picard in Star Trek: The Next Generation, by firmly uttering the words : “Tea. Earl Grey. Hot.” You may not have a replicator at hand to dispense the required beverage, but hopefully one of your nearest and dearest may obey orders and march to the kitchen to switch the kettle on.

Anyway, what better way to celebrate the man who abolished slavery and reformed the British voting system than to raise a cup and drink a toast with the brew named after him – Earl Gray.

Posted by Christine Harding at 2:58 pm