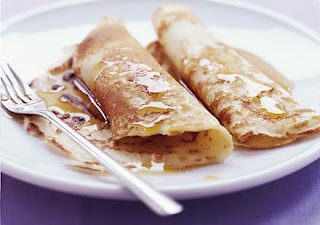 TODAY is Shrove Tuesday - better known as Pancake Day - which is the day before the start of Lent, when Medieval Christians used to make their pre-Lenten confessions, or 'shrifts' (from which the day takes its name) and could then be shriven, which means they received absolution for their sins. It was the feast before the fast, a day of feasting when people sized the chance to eat any luxury food that was still left before the Lenten fasting period kicked in, so things like eggs were mixed flour and turned into pancakes, a tradition which continues to this day in many parts of Europe.

Fairs and carnivals, like the Mardi Gras, are still held in many place, while some also stage pancake races and Shrove Tuesday Ball Games, like the ones held at Atherstone, in Warwickhire, or Ashbourne in Derbyshire. The Atherstone game has few rules, and involves teams scrambling for the ball as the mass of bodies surges up and down the main street. Whoever is left holding the specially-made ball when the final klaxon sounds is the winner, and is accorded iconic status by the townsfolk.

The game has been held every year since King John offered a bag of gold to the victors in a match between the Warwickshire Lads and the Leicestershire Lads but, according to local historian John Austin it may owe its origins to the camp football played by Roman soldiers at nearby Mancetter.

Shrove Tuesday is always 47 days before Easter Sunday, and Lent - the run-up to Easter - represents the 40 days Jesus spent in the wildnerness (but Sundays are not counted). Traditionally, Christians marked Lent with sprayer, fasting and almsgiving, and many people still follow this custom by giving up something they enjoy during this period, whether it is a personal choice to abstain from chocolate, or a community decision to hold events like Lenten Lunches, which make us think those who are less fortunate than ourselves.

You may not be a Christian. You may not be religious. But it is always good to puse and reflect on life, and Lent is a good a time to think about the world and your place in it. However, the emphasis of Lenten traditions seems somehow to be on the negative, rather than the positive; they are about 'not doing' rather than 'doing'. Perhaps, instead of using it as a period of abstention we should think more about how to improve the quality of life, for ourselves and far others. Something as simple as smiling at someone you pass in the street, or thanking a bus driver or shop assistant could make their day better.

Christian Aid, which runs its main fund-raising campaign during Lent, is urging us all Count Your Blessings and has drawn up a list of daily actions which will not only make you do that, but will also help provide practical assistance for those in need. The charity is using modern technology to get the message across - there is a website at http://www.christianaid.org.uk/ and a pdf showing what you can do to help at (http://www.christianaid.org.uk/images/cyb-main-resource.pdf) In addition you can follow the Count Your Blessings journey and read about the daily actions on Twitter, by going to twitter.com/Christian_Aid and searching for#cyblessings.

*The picture is from the BBC ood Food website (http://www.bbcgoodfood.com/content/recipes/features/shrove-tuesday/1/) which has some lovely recipes, and really clear instructions on how to make pancakes.

Posted by Christine Harding at 8:39 pm