Soup for the Soul 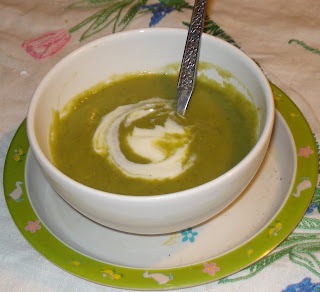 I AM, as they say, on the horns of a dilemma, unable to decide what to write. I could expound upon the learning process and writing essays, or whinge about recycling and the rubbish collection or, as the days are drawing out and bulbs are beginning to bloom, I could wax lyrical about the joys of spring.

But I think I shall continue with yesterday's thoughts about saints and leeks. Today is St Chad's Day, when people used to plant their peas. One traditional old rhyme says: "St David and Chad, Sow peas, good or bad." However, it is still too cold to plant anything - and in any case the garden needs a major overhaul after the winter -I decided that cooking pea soup was a better way to mark the occasion. And, since I still had the leeks I didn't use yesterday, I thought I would try making a leek and pea soup - though a pea and leek risotto might have worked just as well.

I added an onion, some potato and celery to my my chopped leeks, swetaed everything in butter until it was soft, then added peas, water and stock powder, simmered gently for 20 mnutes or so and whizzed everything together with some mint. A dollop of cream would have been good, but in its absence I added a swirl of plain yogurt. And, for good measue, I threw in some pot barley while the soup was cooking, having discovered the following gem in my trusty boo of saints: "Upon St David's Day, Put oats and barley in the clay."

Now I am not religious, but last year on Facebook I tied to find an interesting saint each day - and to think of a way celebrating, so this soup fits the bill for not just one, but two saints. And while it may be very green, it tasted jolly good, so in the months ahead I may re-instate by saintly calendar on this blog. Tomorrow , by the way, is St Winnold's Day, when accoding John Vince's Discovering Saints in Bitain: "First comes David, then comes Chad, And then comes Winnold, as if he were mad." But you will have to wait to find out more.

Anyway, Chad was a 7th century Bishop of Lichfield, who studied under St Aidan at the Celtic monastery in Lindisfarne. Much of what we know about him comes from A History of the English Church People, written by the monk the Venerable Bede's, who claimed to have spoken to people who actually knew him. 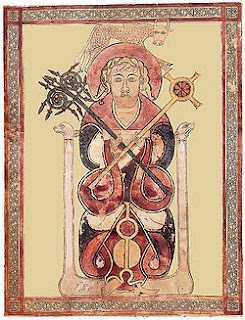 A page from the Lichfield Gospels.

He includes the tale of how Chad converted the Mercian Princes Wulfhad and Ruffin, but the boys wre slain by their father Wulfhere, who had lapsed back into paganism. Repenting, the King rushed off to beg forgiveness from Chad, saw the light and became a devout Christian.

Chad, whose three brothers were all involved with the church, became a saint almost immediately after his death and remained popular throughout the Medieval period, attracting pilgrims to Lichfield, initially to see his simple wooden tomb, and much later to view his ornate shrine. Over the centuries all kinds of healing miracles were recorded including, according to Bede, a that of a madman who sheltered in the church building overnight and was restored to his right mind the following morning.

His shrine and bones disappeared during the Reformation, but during recent excavations in the cathedral fragments from an Anglo-Saxon shrine chest were discovered, carved with the figure of an angel, and this is thought to be the saint's shrine. And bones preserved in a relinquary at St Chad's Roman Catholic Cathedral in Birmingham are believed to be those of St Cad.

You can still find reminders of him in and round Lichfield. By St Chad's Church, overlooking Stowe Pool, is the well (now housed in a special edifice) where Chad baptised people and is said to have stood and prayed.

And among the Cathedral's prized possessions are the Lichfield Gospels (also known as the St Chad Gospels), written in the 8th century, and known to have been kept at Lichfield from the 10th century, though whether they were actually written there is uncertain.
Posted by Christine Harding at 5:59 pm