We spent a week walking around the Southam area of Warwickshire to see where where the forefathers of the Man of the House lived and worked.

He had always understood that his father's side of the family moved to the north of England from Germany, so it came as a surprise when he discovered that not only were they English, but they lived in the Midlands, not far from where we are. 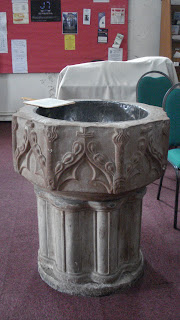 In St Margaret's Parish Church at Wolston we saw the font where his great-great-great-great grandmother was baptised, and were given a guided tour by church members, who proudly pointed out the carved sheela na gig at the top of a column - it always seems so odd to find such a pagan (and sexually explicit) symbol in a Christian church.

There were also remnants of wall painting dating back to Medieval or Tudor times and a beautiful decorated ceiling.

We also visited St Gregory's Church, in Offchurch, where his great-great-great-great grandparents were married. The building had a 12th century lepers' window (also known as a squint). Now filled with stained glass, it was once a small opening covered with a wooden slat or shutter so lepers (who were forbidden to enter churches) could stand outside and listen to the service.

In addition the church contained the remains of a stone tomb, allegedly that of Offa, King of the Mercians (or, possibly his son). Apparently this small isolated village was big and impartant in Saxon times and Offa had a palace there - hence its name.

I was intrigued by this, since we live in Tamworth, which was the capital of Mercia, where Offa had his main palace. 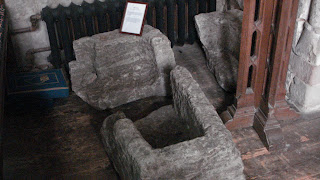 It was quite amazing - and rather moving - to stand in the churches where The Man's forebears stood all those years ago and to think of how hard life must been for them,
Posted by Christine Harding at 9:43 pm