A Loaf for Lammas Day 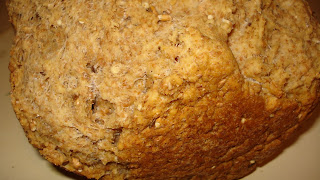 TODAY is Lammas, when a loaf baked from the corn of the first sheaf cut was blessed in church.

The word Lammas is thought to be derived from loafmass, and it was an ancient festival celebrating the first fruits of harvest – unlike the more modern harvest festival which marks the end of the season.

In some areas ‘first loaves’ were kept for luck, or crumbled in fields or barns to bring a good harvest the following year, and corn dollies made from the first sheaf were also considered fortunate.

Additionally, labourers were often required to present a portion of their harvest to their landlord on Lammas Day, and it was one of the traditional days on which rents and taxes had to be paid.

In Medieval times the festivities lasted a week or more. Lammas fairs were hugely popular, and were considered a good time for weddings and betrothals.

But Lammastide ceased to be observed during the Reformation, when Henry VIII broke with Rome and the Church of England was founded.

But the name lived on as ‘lammas lands’ or ‘lammas fields’. These appear to have been common lands, often on low-lying or marshy land alongside rivers. Corn and hay were grown on strips, but after Lammas, when the harvest was over, commoners had the right to graze animals there through the winter months.

When I was a child, there was a ‘Lammas’ at Staines, on the other side of the river to Egham, where I lived. We spent many a happy day there during the summer, splashing about in a little swimming pool – and for years and years I thought Lammas was another name for a pool.

When I looked on the Internet, I found the site is still recreational, and there is a local soccer team called The Lammas, as well as a Lammas Band, so the link with the past continues.

There are similar sites elsewhere in the country – someone told me of one in Cambridge, while Lammas lands were among the areas cleared to make way for the London Olympics site, which provoked as much anger as the historic enclosure of common land.

Exeter maintains tradition with an annual Lammas fair, as does Ballycastle, in Ireland, and some churches have re-introduced Lammas services.

I marked the occasions by making bread (in the breadmaker, not by hand). But the yeast was old, and I didn’t have enough bread flour, so I used ordinary flour, and the result was not one of my greatest culinary successes, but it will make nice toast.

And I can always let it go stale, crumble it, then strew it around the garden, shed and mini-greenhouse to bring fortune in the year ahead.

Pictured below is a picture I found on the web of Staines Lammas swimming and paddling pool as it was when I was a child. There was a swimmin area in the river as well.(http://middx.net/photopost/showphoto.php/photo/15190) 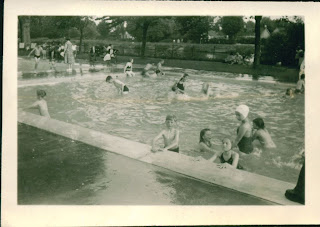 Posted by Christine Harding at 9:03 pm