Putting up a 3D Jig-saw 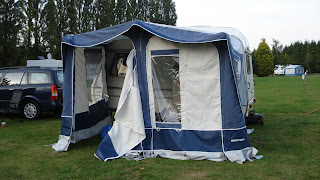 WELL,we survived our first adventure in The House on Wheels and are now back home - and already planning our next trek.

The Man of the House coped brilliantly with towing, but I was much more nervous. My role as passenger and navigator gave me plenty of scope to worry. I kept looking through the rear window in the expectation of seeing the HoW backing away from us, as we continued to travel forwards.

Fortunately, that didn't happen, but I was also fearful that the HoW would topple over, or be blown on its side, or that the door would burst open and our possessions would would hurtle out...

And if that wasn't bad enough I was uneasy about the House we Left Behind. Did we shut all the windows? Did we lock the doors? Did we turn everything off? Would the cat be good for his 'sitter'? Did I put the rubbish out? Had I left the iron on?

As a result of all this fretting, by the time we reached our first campsite I was a nervous wreck - a condition not improved by our attempts to erect the awning.

What seemed like acres of canvas had to be slid into position at the side of the HoW and manhandled over a framework constructed from a mystifying collection of metal poles of varying sizes. In addition, there were monster rubber bands, ties and metal pegs to keep the assemblage in place.

The instructions consisted of a rather bad diagram on a small piece of paper, and the whole experience was reminiscent of our past struggles with flat-pack furniture -it was like trying to put a three-dimensional jig-saw togther, without the aid of a picture.

Spurred on by our success at a site near home (close enough for a hasty retreat if anything went wrong!) we ventured further afield, but failed to pluck enough courage to wrestle with the awning again.

However, apart from that, we had a wonderful, relaxing week. We stayed on sites surrounded by hedges and trees, with mushrooms growing in the grass alongside dark green 'fairy circles'.

Other caravanners were unfailingly friendly and helpful, offering advice, and showing us what to do.

And people were just as nice in the villages where we wandered around, hunting for information about the Man of the House's ancestors and the way they lived 160 years ago.
Posted by Christine Harding at 9:46 pm