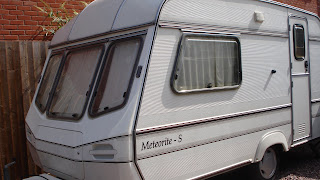 WE have bought a dear little caravan. Like us, it is a little battered around the edges and somewhat faded by time, but it is watertight, dry and cosy.

It has an awning, pale green, velvet curtains and green floral seating, which doubles up as bedding (two single or one double, depending how friendly we are feeling!)

There is plenty of storage space, a tiny shower, the smallest sink I have ever seen, (with a lid to cover it – how I wish I could cover the sink in the house), a fridge, a two-ring stove and a heater.

The Man of the House, who will be doing the driving (I have no intention of towing anything, least of all a caravan, however small it may be), plans to take us to folk festivals and research the family history (his).

I want to go to literary festivals and research the family history (mine).

Clearly, there could be some kind of conflict here, so a compromise will have to be reached, but there is plenty of scope to visit the sites where our great-great-greats lived and worked.

We aim to start by travelling somewhere relatively close, where there are no hills or bendy roads hills, or bendy narrow roads! Then, when we’re feeling confident (and competent) we can venture further afield.

Nor is our holiday home as romantic-looking as a traditional Gipsy caravan.

But it is more homely and reminds me of childhood holidays. In those days even static caravans where we stayed had no electricity: the lights and cooker all ran on Calor Gas, and when we stepped inside for the first time there was always a strange but distinctive smell, a mix of mustiness and gas.

Anyway, we collected our caravan yesterday, and set off for home, expecting the journey would take around half-an-hour, but we took a wrong turn somewhere, got lost, and travelled in a huge circle, arriving back at the place where we had bought the caravan an hour or more after we left them!

Eventually we got back to the house, safe and sound, but the trip reminded me of the GK Chesterton poem The Rolling English Road:

Before the Roman came to Rye or out to Severn strode,
The rolling English drunkard made the rolling English road.
A reeling road, a rolling road, that rambles round the shire,
And after him the parson ran, the sexton and the squire;
A merry road, a mazy road, and such as we did tread
The night we went to Birmingham by way of Beachy Head.


It is to be hoped that by the time we embark on our first trip our sense of direction has improved, but part of the charm of caravanning is that you explore new places. 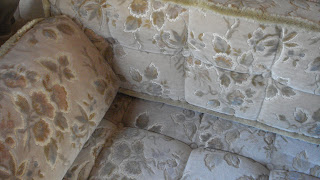 Posted by Christine Harding at 12:40 pm