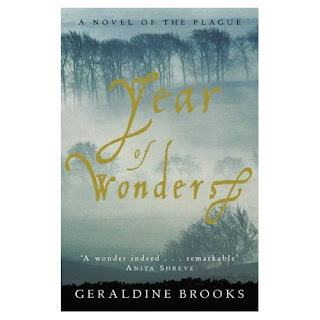 MY haul of charity shop goodies has produced two gems so far.

Year of Wonders, by Geraldine Brooks, and The Secret Scripture, by Sebastian Barry, have both made their way on to the ‘read again’ shelves. How could anyone have parted with either of them?

The first book, the author’s fictional debut, is described as ‘A Novel of the Plague’, and was inspired by the story of Eyam, the Derbyshire village which shut itself off from the world in a bid to halt the spread of the disease.

Eventually, to prevent further contagion, church services were held outside and those who died were buried beside their homes, rather than being carried to the hallowed land of the graveyard.

It’s difficult to grasp the full impact of such actions on a society where the church held such an important position and religion played a far stronger part in people’s lives than it does today.

Set in 1665/6, the novel portrays a world where blind faith vies with superstition, where knowledge strives to overcome ignorance, and where the social order of the day prevents growth and understanding.

It explores the relationships between villagers as they struggle to come to terms with the disaster that has overwhelmed them, and looks at the way they react to the deaths of others and to their own mortality.

For just over a year villagers live a strange, isolated life. Some are driven mad by fear and loneliness, while others see a chance to pay off old scores or further their own ends, and a few selflessly do what they can to care for the sick and dying and to aid the survivors.

Anna Frith, the young, widowed narrator, watches as her lodger, children and neighbours all die. Somehow, she manages to combat despair and, as she tends those who are ill, she acquires new skills which enable her to step out of her lowly position, take control of her own life and to help others.

Befriended by the rector’s wife, she gathers knowledge where she can. As she observes the villagers in their hour of need she begins to understand something of human nature; she learns to read and write, becomes a talented nurse and can translate the Latin in medical books.

But when the ‘all clear’ is sounded things can never be the way they were: once the plague has passed the survivors have more trials to face as they realise how few are left to cope with the tasks of everyday life, for animals must still be cared for, crops tended and harvests gathered.

And there are more horrors in store before Anna finally finds the confidence to make a new future for herself far, far from home.

Some of the characters in the book are base on actual people, while others have been created by the author but, thanks to her meticulous research, they all live and breathe like real people of the time – and looking at people’s reactions to the unknown, I wonder if we really have moved on that much in the last 350 years.

Visitors to Eyam cannot fail to be moved by the story of how some 260 villagers sacrificed themselves for the greater good. And there is a kind of triumph in their tragedy, because they did prevent the disease spreading to neighbouring parishes.

This novel gives them a voice, and makes a plea for acceptance and understanding.

Verdict: I really enjoyed this book. It made me think about the way people deal with illness and disaster that are outside their control, and about women's lives. Defintely one to be read again.

* See tomorrow's blog for a review of The Secret Scripture.
Posted by Christine Harding at 3:38 pm