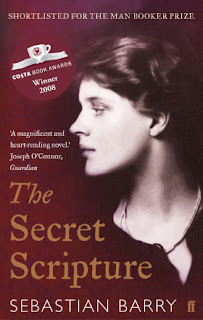 TIME to review the second of my charity shop gems. The Secret Scripture, by Sebastian Barry, was a wonderful read that could only have been written by an Irishman. The lovely, lyrical language sang with an Irish lilt, following the cadences of speech in the author’s native land.

Roseanne McNulty has been incarcerated in a decaying mental hospital for the last 60 years. Now, nearing 100, she keeps a hidden journal, an account of her past life and how she came to be in care.

It tells of her childhood, when her Presbyterian father was superintendent of the Catholic graveyard in Sligo town during the bitter days of the civil war, as Republicans fought supporters of the recently formed Irish Free State.

It tells of her job in a café, her marriage, her fall from grace in a society where a married woman had no life of her own, the birth and loss of her child, and her life today.

It tells of the parish priest whose word was law in the local community, and whose decisions had such a terrible impact on Roseanne and her family, and it tells of her life and feelings today.

Alongside her tale another story unfolds in the Commonplace Book written by Dr Grene, the hospital’s senior psychiatrist.

He sets out to chart his efforts to oversee the closure of the hospital and the moving of patients to a new facility. But he also writes about his own life: his youth, his failed marriage – and his search to discover more about the elderly woman in his care, who seems to have been erased from history, nullified by those who knew her.

Roseanne and Dr Grene have both known love and loss, hope and disappointment, joy and despair as they search for identity. Their testimonies augment each other and eventually converge in an ending which is not unexpected – even though the book blurb describes it as a ‘shocking secret’.

There are echoes in Roseanne’s story of Ireland’s infamous Magdalene ‘laundries’ for fallen women, and we should not forget that there are still societies where women pay a heavy price for not conforming.

Verdict: I loved this book. It made me angry and sad and joyful in turn – and sometimes all at once. It is a beautifully written (almost poetic) tale that I know I will return to again and again – so into the re-reading section it goes.
Posted by Christine Harding at 10:59 am