A Tapestry of Love 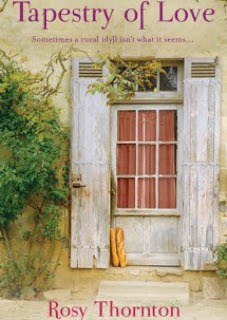 ROMANTIC fiction is not necessarily a genre with which I am familiar, and it is always a little worrying to review a book written by someone you know – it’s a bit like reviewing dramas or musicals produced by or starring friends.

I used to do this when I was reporting and was often faced with a terrible dilemma because I hated to hurt people’s feelings by saying their show was terrible (even if it was).

On the other hand, I have my own integrity as a writer to consider, and have always been as truthful as I could.

However in the case of Rosy Thornton, an online friend (and a friend of a friend), I need not have worried.

The Tapestry of Love, her latest novel, is a wonderful read, and I loved it.

I immersed myself in it over two days while holidaying in the House on Wheels, in lovely sunshine, on a beautiful site with well manicured grass, full of mushrooms and fairy rings, which somehow reminded me of sites we stayed on in France when I was a child.

So this novel , set in France, was just perfect – it captured the feel of the country so well that it was a shock to hear the voices around me speaking English and to realise I wasn’t abroad after all.

The book is an assault on the senses. I could see the harsh mountain scenery of the Cevennes, and feel the weather as the seasons unfolded: the sad rains and howling winds of autumn, the bitter ice of winter and the searing, debilitating heat of summer.

I could hear the buzz of the bees, a hunting owl and the rhythm of cicadas.

I could smell the damp earth of the forest, herbs growing – and food being cooked and served.

Indeed the descriptions of food were so good I could actually taste the dishes and even the wild b0ar casserole seemed attractive (not something a vegetarian would usually say – I don’t even eat meat substitutes).

Oh dear, I have rambled on without even mentioning the plot or characters, but I wanted to try and portray the feel of the book.

So here goes. Catherine has left her home in England for a new life in the Cevennes mountains, where she once spent happy childhood holidays. There she hopes to build a business stitching tapestries and soft furnishings.

She leaves behind her grown-up son and daughter; her mother, who suffers from Alzheimer’s; her high-flying sister and her ex-husband, who has just been dumped by the woman he left her for almost a decade ago.

Rosy Thornton handles Catherine’s relationships with her family well – especially that with her journalist daughter, whose short-lived enthusiasms give cause for concern, but who always lands on her feet.

Relationships between Catherine and her new neighbours are also deftly drawn.

From her first quirky encounters with them – including an initial encounter when her car is surrounded by sheep on their way down the hillside to overwinter on lower pastures - friendships are built slowly and she gradually becomes a part of the community.

But it her budding relationship with the reclusive mystery man Patrick Castagnol - threatened by interest from her sister – which is the most important.

In the tradition of all good romantic novels, Patrick is impossibly perfect. Good-looking, suave, sophisticated, but equally at home in the rural mountains, he speaks fault-free English, is well read, well-educated and a marvellous cook. But he has a past….

And it is not as frothy as sounds. There are deeper issues at stake here, such as sibling rivalry and Catherine’s feelings of guilt at abandoning the mother whose illness means no longer recognises her.

It also explore the problems of rural life where traditional work has been lost as young people move away, and the bureaucracy imposed by national park status can stifle future growth while trying to protect an area from development.

Above all, A Tapestry of Love is a love affair, not just between two people, but with a country – France.

Read it and enjoy.
Posted by Christine Harding at 7:30 pm

Email ThisBlogThis!Share to TwitterShare to FacebookShare to Pinterest
Labels: A Tapestry of Love, love affair with a country, romantic fiction, Rosy Thornton